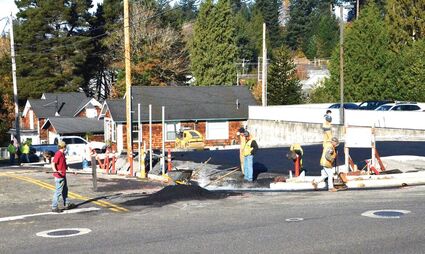 The Town of Cathlamet's Butler Street lot contractor applied asphalt paving, on Monday. Three high power electric vehicle charging stations are being installed in the present phase of the project, which in the long run, calls for landscaping and installation of tourist information. Mayor David Olson said this week that the work should be done by mid-December.

Just weeks after learning their application for a state Recreation and Conservation Office (RCO) grant to construct Waterfront Park had been rated too low for funding, Town of Cathlamet officials learned last week that, indeed, RCO would award funds for the project.

Mayor David Olson said Monday that the award would be for the town's application in the two-year 2020 funding cycle, not the latest application for the 2022 cycle. The town's 2020 application had been ranked in 24th position, and RCO officials said funds became available as higher ranked entities declined their awards because of financial problems caused by the covid-19 pandemic.

The town had amended their proposed project for their 2022 application, and the 2020 plan lacked some of the features included this year. Consequently, the town's matching share shouldn't be as high as it would have been with the 2022 proposal.

In his report, Olson said the town would need to match approximately $166,000 for the $500,000 project. Council members, at the meeting on Monday, voted to certify they would include the matching funds in the 2023 budget.

In other business at the council's Monday meeting:

--Council members and Clerk/Treasurer Sarah Clark went over the latest changes to the town's 2023 budgets. Clark commented that she and her deputy would like to move the Town Hall office to the vacant community center space in the library building, and that should be considered for the budget. The current office is located in a moldy building, she said.

--After long discussion, council members approved a declaration of non-significance for Port District 1 for a project to install an electric line for campsites located on the dike separating the Elochoman Slough Marina moorage basin from the slough.

--Cathlamet Fire Chief Vernon Barton reported the department has handled a steady load of calls, but at anticipated levels.

He also reported a fire safety issue at the marina--fire codes require water lines and standpipes for fire fighting access on long docks. The port installed a line on C Dock several years ago, but the project has never been completed on other docks. Olson said he and Barton would meet with port officials to discuss the situation.

--Columbia Street resident and former Council Member Bill Wainwright reported neighborhood residents are becoming increasingly upset with speeding traffic on the street. Speeding appears to have increased since speed limits were lowered on SR 4 earlier this year, he said. People have been accosting drivers, and there have almost been fights. It is also dangerous for people leaving their driveways in their vehicles.

He said he had talked to county officials and had been told they were unable to address the situation. He asked the town to take action, such as installing speed bumps or purchasing a trailer with a radar and display that tells drivers how fast they're going.

Attorney Johnson commented that it would be hard to force the county to take action. Columbia Street, he said, was the original route of SR 4, and when the highway was relocated, the town declined to accept the state's vacated right-of-way, and it became a county road.

"They'll tell you, 'We'll give you the road way and you can take control,'" he said.

Olson said he would discuss the situation with county officials.

"The county has been really cooperative," he said. "I just need some information."