A pioneer Christmas in SW Washington 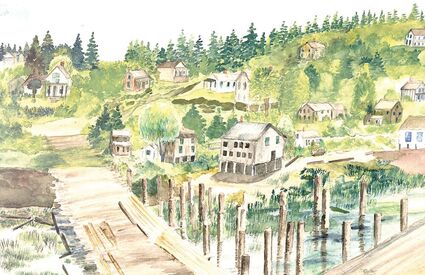 Maude Butler's painting, "Early Cathlamet" shows the plank dock and buildings, including her house on the left. From the Karen Bertroch collection.

As I have told you of the first Christmas celebration in the Elochoman Valley, I wish I were able to give you a first hand account of the first public celebration in Cathlamet but I was not there. It was about 1889. A man by the name of Schmidt had made a small fortune from sturgeon fishing and decided to share some of his wealth with the people of the little community by giving a big Christmas celebration for all the children who cared to come. George M. Cornwall, later the founder of the Oregon Timberman, was appointed as chairman. He and Alfred Davis were owners and editors of the Cathlamet Gazette, the only newspaper on the lower Columbia at that time, except the Astoria papers. Since both young men were interested in boosting community affairs, they eagerly promoted Schmidt's plan.

There was standing on the brow of the hill in front of the schoolhouse, an old Catholic Church. The windows and doors were gone, and it literally had bats in the belfry. The Christmas committee decided to hold the program there. "Cold as a barn," Mother commented. When the windows were boarded up she declared, "It's just a fire trap. George Cornwall should know better than to have anything here. We are certainly not going." Schmidt had generously provided enough gifts for everyone and some to spare. They were mostly books – the classics. One of the Andrews girls received The Vicar of Wakefield and for days there was an argument about the pronunciation of Vicar. O.M. Harvey, the itinerant school master, and Clemens, an ex-county school superintendent, finally settled in. We heard that the church was packed, evidently no one minded the cold. The lanterns, which lighted the old building, proved to be perfectly safe so there was no fire and everyone except a lonely little girl had a wonderful time.

There were no more public celebrations until the Congregational Sunday school was established. The most eligible bachelor of the settlement, Charles Warren, married Lettie Smith, one of the prettiest young women on the river, in 1890. As the Warrens had always been Congregationalists that church organization seized the opportunity to organize a mission in Cathlamet and young Mrs. Warren became superintendent of the Sunday school, a position which she held for many years. Not only was Lettie Warren a very beautiful woman but she possessed executive ability that would have done credit to a five star general, and the health and energy that made it possible to carry out the campaigns she formulated. In fact, her talents should never have been confined to a small community of unwilling workers. It seemed to be wasting fragrance on the desert air. Besides her other endowments she had a very fine voice and this enabled her to train the Sunday school pupils for musical programs. She was ably supported by several nieces and nephews who also were musically inclined and clever performers.

As Christmas approached, the Sunday school enrollment would increase. Children, who ordinarily preferred to go fishing or tramp through the woods on Sunday, came to Sunday school because they wanted to be in the programs and get in on the treats. The regular school never interfered by observing Christmas in any way. If the youngsters wanted to have a part in observance of the great day, they came to Sunday school. That system saved overworked school teachers a great deal of effort and it stimulated interest in the Sunday school because occasionally Christmas enrollees stayed on after the big celebration was over.

After the Congregational church was built, these community Christmas celebrations were held in Birnie's hall which was built over the general merchandise store and the saloon. Alec Birnie always contributed the use of his hall and was a generous donor for the treat. Not only did Mrs. Warren direct the program, but she raised money for the candy and nuts, which would be passed out to each child. John Doumit always gave one or two crates of oranges, as many as were needed, and sold the candy and nuts at cost. The other storekeepers, who came on the scene from time to time, also sold the Christmas treats for cost besides making substantial cash contributions.

Always by December 1, the practice for the Christmas program began. As you may guess, they were of the operetta type. Mothers were more than glad to help costume their children, and Mrs. Nellie White, Mr. Warren's sister, helped train the children on their marches and drills and when the performance was presented on Christmas Eve, it was worth all the time and trouble. The hall was packed with parents, friends, and just spectators.

The Christmas tree, minus candles, stood in the center of the stage and Santa Claus arrived at just the right moment to pass the treats and presents. It was the custom for families to bring their gifts to the tree and twice that number of in-laws seemed to form a human chain from their seats to Santa Claus. I am sure that each gift was separately wrapped. But everyone enjoyed it even if it was tiresome to sit during the present distribution ordeal, especially if your parents did not believe in carting your gifts to the hall. What if people thought you did not receive anything?

When the Christmas programs were moved away from Birnie's hall to the new Congregational church, they seemed to lose some of their glamour. Maybe the more talented children moved away, or the new minister felt that the religious spirit should prevail. They were called cantatas by then and angels took the place of Santa's elves. After all, we were moving out of pioneer days.