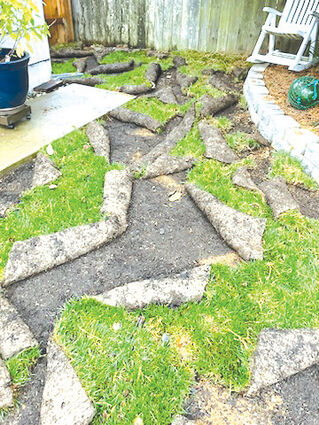 Cathlamet resident Gloria Johnson believes raccoons are the reason she keeps finding the sod behind her home overturned in the morning, despite her best efforts to deter them.

It's been a frustrating few days for Gloria Johnson in Cathlamet.

Several mornings in a row now, she's discovered that something is turning over the newly laid sod in her back yard. It hasn't had a chance to take root, and may not if these high jinks continue.

She's come to the conclusion that it's raccoons, trying to get an early breakfast of grubs. Raccoons have been seen in the neighborhood, Johnson said, walking on a nearby fence or living in a tree across the street before it was cut down.

Following advice from friends, she put down Irish Spring soap, sprinkled deer deterrent, bought motion sensor lights, and conducted enough research to find a chemical that would kill the grubs and wouldn't hurt her cats or her neighbor's cats. The product cost her $200.

She thought it was working. A few days later, the mysterious creatures were back to their old tricks.

More motion lights have been added, and on Friday, a friend set a live animal trap, complete with a honeybun to entice the mischievous varmint.

Johnson decided to contact The Eagle after a neighbor told her that someone living nearby was allegedly feeding raccoons,

"These are wild animals!" Johnson said. "You don't want to encourage them in the neighborhood."

"There are a number of reasons we don't advise that people feed wildlife," Assistant District Wildlife Biologist Nicholle Stephens of the Washington Department of Fish and Wildlife said. "With raccoons specifically, the main concerns are that once raccoons begin to associate humans with a food source, they can quickly become a nuisance by getting into trash receptacles and pet food."

Raccoons could injure pets while trying to access pet food, and Stephens recommends feeding pets indoors and not leaving uneaten pet food outside.

"The food that humans feed wildlife can potentially cause illness because their digestive systems aren't equipped to handle large amounts of unnatural food sources," she added. "Providing high calorie food sources can also cause congregation of animals in numbers that we wouldn't find in the wild. When this happens diseases can spread among individuals more readily."