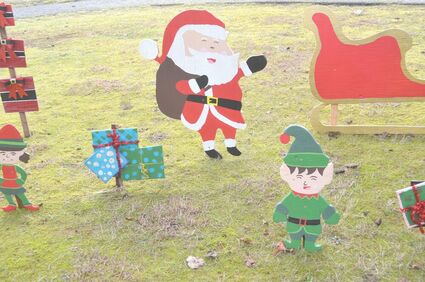 Santa and his elves are available for all photo opportunities at Vista Park. The figures are part of a growing collection of handmade figures in Vista Park's annual Christmas light show, which promises to get bigger every year.

"I wanted to put life back into the building for the community," Port 2 Assistant Manager Terina Davis said. "There are still a lot of unknowns about the main hall. It may be used as a place for the community to gather, with couches and TVs or technology centers. Something to benefit not just Vista Park and the port, but the community as well."

A lot of work is already done, but there is more to do. New heaters were installed in October. The kitchen has become a break room, and they've bought an ice machine.

While they are excited to show off their new home, the employees really hope visitors will continue on in to the park to see their loop of Christmas lights, a project that was initiated by Davis three years ago, and quickly embraced by the rest of the staff.

The Christmas lights, which will stay up at least until January 1, come on around 5 p.m. every night, and stay on until 7 a.m.

It all started with a cutout of a trailer, not long after former Port 2 Manager Jeff Smith approved a small budget for Davis' proposed project.

"When we lived in central Oregon, there was a place call Eagle Crest that had a beautiful light display," Davis said. "We would drive through with my kids. I thought, we don't have anything like that in this community, and that's what sparked it with me." 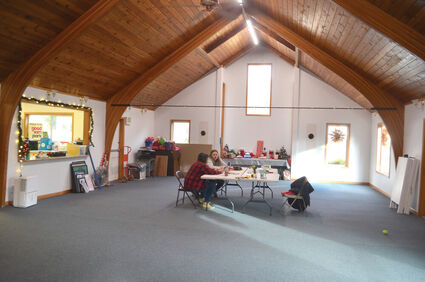 The former Skamokawa United Methodist Church is now the Carlton Appelo Center at Skamokawa Vista Park. Port 1 staff have moved their offices in and are making all kinds of improvements, with plans to become a gathering center for the community.

"Everyone has been great and just kind of gone along," she laughed.

Clearly, they love it. Planning, construction, and installation is a group effort, and everyone has the freedom to add their ideas and be creative.

They've added new scenes every year, lit by spotlights, and there are colored lights all around. Everything is handmade, and they take real pride in it.

Santa and his elves and reindeer are there, and a family of Sasquatch hide nearby. This year the team built a gingerbread town. And yes, next year is already in the works.

The are challenges, chiefly strands of lights going out and electrical issues in other areas of the park, but one day, Davis hopes to see the whole loop lit up, and lights all over the park.