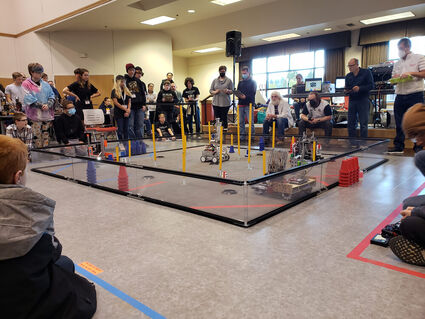 Robot 11186 ("Hera") completed dropping a cone and correctly parking during Autonomous mode. The Driving team of Nathan (driver), KT (coner), Arwyn (placer) and Micah (coach) watch the perfect run. No other team could do this. Photo courtesy of Emmaline Vik.

Last Saturday your Mecha-Mules again went to Lower Columbia College and competed with 11 other robotics teams from SW WA and came away with wins in all six of our matches. We currently lead our 30-team Regional. All 30 teams gather on Saturday December 17 in Battle Ground to determine the seven teams who advance to the State tourney Jan 28 in Seattle. Note that, unlike sports, there are no divisions based on school size. Our Regional competition includes smaller schools like ours and 4A schools like Union HS and Olympia HS.

We were leading after the first round of matches last month and decided to completely build a new robot. We designed our new robot so that its basics were simpler, yet the components we added, simple each by itself, combined to make a very effective robot. The biggest change was from a holonomic drive using mecanum wheels to an H-drive using omni wheels. This also allowed us to build a smaller robot that more easily traversed among the pylons on the competition field than all other robots at the tourney. We added a second sensor for autonomous mode (no one else did) to identify when to drop cones onto pylons. We changed grippers to one we had been testing earlier. We also modified the driving commands in teleop mode so the robot could perform turns more easily from different sides of the field. No one else did that either. All of this added up to six convincing wins in our six matches. To emphasize that point: in the first tie-breaker category we have over twice as many points as the second place team.

Our competition strategy was also different from the other robot teams. While they tended to focus on their robots building a few tall structures, we focused on ours being quick and maneuverable to build many small structures. Our strategy and simplicity really began to show near the end of the day when the more complex robots began breaking down. Ours just kept on running ... and winning.

To completely rebuild our robot and refocus our strategy was risky, but it paid off. At the first League meet our average score was 62.5. At this second meet our average jumped to 114. No other team in our Region has an average over 100 points.

We have had great sponsor support this season from our community: Cathlamet Building Materials, Maria's Place, BackRoadz, Georgia Pacific, Wahkiakum Chamber of Commerce, Jabber Shack, The Video Store, and The Pizza Mill. And on Saturday, Jimmy Johns of Longview joined our team by providing and bringing to us lunch during the tourney, and dinner during our team debrief back home in Cathlamet. .Thank you all for your support. If your organization would also like to support us, please contact Mecha-Mules robotics at Wahkiakum High School.