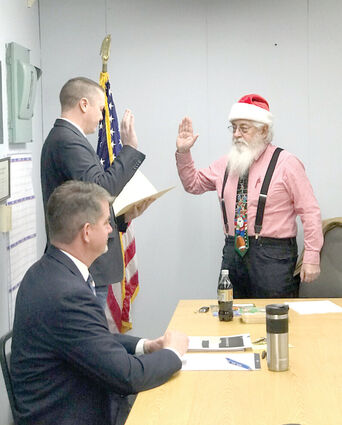 Counsel Tim Hanigan gave Commissioner Dennis Reid the oath of office as he was sworn in for another term at the Wahkiakum PUD. Seated below, General Manager Dan Kay. Photo courtesy of Katie Thomas.

Dennis Reid swore the oath of office after reelection to his position as a member of the Wahkiakum County PUD Board of Commissioners on Tuesday, and General Manager Dan Kay and Auditor Erin Wilson gave a presentation on the state of utility.

It was a time of coming out of covid-19 and what is going to be the new normal, Kay said, from whether to have meetings in person or hybrid, or how to address challenges like inflation and supply chain issues.

According to the presentation, the mission of the Wahkiakum PUD "is to provide the most reliable electric and water service at the most reasonable cost along with quality customer service to the district's ratepayers and maintaining a safe and healthy workplace is a top priority."

Wilson said that over a third of the PUD's costs go to labor and benefits, while another third goes toward the cost of power and water.

"We've spent a lot of time talking about our inventory," she said. "It's really a very small part, dollars wise, but it is just a big part of what we do."

Wilson said that the PUD completed a lot of work orders for customers in 2022, including 93 on the electric side, seven on the Puget Island Water System, and 11 on the Western Wahkiakum Water System.

Some proposed electrical projects in the next five years include updates to the Cathlamet substation, like a new power transformer, security, and insulator or battery and charger replacements. The PUD is considering the improvement and replacement of underground distribution at a cost of $150,000 per mile per year, and moving overhead to underground conductors to mitigate wildfires and improve areas that are difficult to access.

The PUD proposed to replace water mains in all their water systems, complete a water main loop project on Puget Island that will cost $435,000, for which more than half is funded by a grant, locate and acquire an emergency water source, possibly in partnership with the Town of Cathlamet, and replace six inch HDPE with eight inch HDPE pipe in the Western Wahkiakum Water System.

They would like to address facilities and fleet issues as well, including security, asbestos abatement, and the purchase of a small bucket truck and a digger derrick.

"We are trying to identify these things before they catch up to us," Kay said.

They are considering risks, like the cost of power as determined by the Bonneville Power Administration, tree trimming and wildfire mitigation, cyber security, succession planning, inventory/supply chain, and aging assets, facilities and fleets.

According to the report there are roughly 3,600 poles in the PUD system. Of those, 843 are more than 50 years old. The PUD plans to test and treat the poles in the system every 10 years to extend the life and reduce the decay in the poles.

"I believe it's important to earmark some money for that every year," he said.

As for water loss in the water systems, industry norm is 10 percent, and standard for very rural areas is higher at 20 percent. The Puget Island Water System has a 6.83 percent annual loss average, while Western Wahkiakum Water System and the Skamokawa Water System losses are much higher at 37 percent and 37.06 percent respectively.

Kay believes that recent work on the SWS will be reflected the next time the data is gathered.

Through data collection, they have discovered that most power outages are caused by natural events like snow load, wind, flood, or landslides. Equipment failure is the second biggest cause. Seven events were caused by humans this year who drove into poles, or dug in the wrong place.

Twelve staff members have 217 years of industry and institutional knowledge, Kay said, before talking about potential retirements, hiring, and training at the PUD.

This year, the PUD completed pole testing and treatment on the west end of the county, and replaced 40 poles. They replaced 1,060 feet of underground primary line, 400 feet of water mainline on Covered Bridge Road, and had all three water reservoirs inspected. There were 72 new customer installations, and they collected nearly $512,000 in advance for construction through November. They've applied for grants for water main replacements, and assisted with Wahkiakum West in over three miles of fiber expansion.

Customer arrearages totaled more than $53,000 at the beginning of the year, but thanks to a Coronavirus Fiscal Recovery Fund, that number had dropped to $6,366, and the PUD just learned they would receive an additional $2,340 by the end of the year.

Numerous pole attachment applications have been coming in, and Kay said that was exciting, because it means more broadband in the county.

According to Kay, their goal is to harden the system and improve reliability.

The state of the utility report can be found in its entirety on the Wahkiakum PUD website.

The public meeting was closed for an executive session to review the performance of a public employee. There was no action taken when the board reconvened.