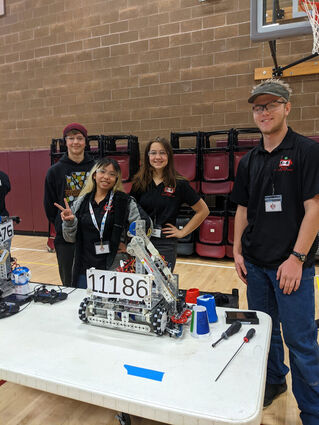 Our drive team: (left to right) Nathan, Arwynn, KT and Peter, with Hera our robot. Photo by Amanda Heston. 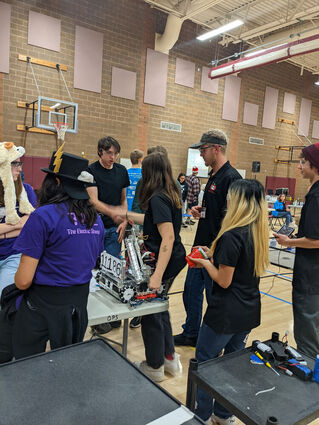 We finished the qualifying matches in the first half of the day last Saturday in first place with more wins than any of the other 27 teams. Then in the afternoon finals between the 12 best teams, we lost our first match, won our second, and in the third match it came down to just 3 points separating the two competing alliances. We lost to the eventual regional-winning alliance, and ended up in third place in the competition category. Our robot and drive team performed incredibly well throughout, we just weren't strong enough to overcome chance in a complex competition. Robotics competitions are different from sports: There are no divisions based on school size. Teams are not only competing on performance on the field, but also on performance on presentation and engineering design skills. In this latter category we also placed third overall. So, as the teams were announced advancing to State, we were in third place out of seven teams advancing from our region. Our next competition is in downtown Seattle on January 28 for State. This year there are 32 teams. Last year at State we placed 17th out of 24 teams. We have a better robot and much more experienced drive and presentation teams this year. Stay tuned.

At the same time, we have three students preparing for competition on January 20 in the Mobile Robotics Technology event of SkillsUSA. Like FTC, these are also land-based robots moving scoring elements around a field in competition with other teams, with engineering and presentation requirements. Beginning in February we start our SeaPerch underwater robotics campaign season, with the qualifying tournament on March 31. We have a lot going on.

If you would like to join our club to help out, or if your group would like to hear a presentation or demonstration from one of our teams, please contact us at Wahkiakum High School.