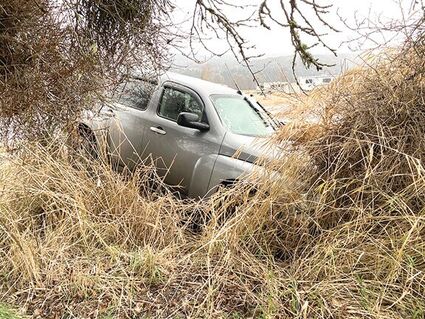 One Wahkiakum County resident trying to get home from work in the freezing rain on Thursday slid into a ditch on Puget Island. No injuries were reported. Courtesy photo.

December 19 - 7:41 a.m. A caller reported that an Elochoman Valley resident suffering from dementia left the home in a vehicle. His direction of travel was unknown. 3:39 p.m. A caller asked for assistance in gaining access to a Puget Island home after his estranged wife changed the locks. The wife said she was preparing to get an order of protection and that she changed the locks so he could not enter the home without her consent. 10:51 p.m. The Cathlamet ambulance aided a Rosedale resident who was sick with a fever.

December 21 - 5:42 a.m. The Cathlamet ambulance aided a Puget Island resident complaining of chest pain. 1:01 p.m. A caller reported that a utility truck belonging to a logging company was speeding on West Deep River Road. 4:39 p.m. A dog wandered onto an Elochoman Valley property. The Wahkiakum Animal Advocates Group was notified and they picked up the dog. 7:56 p.m. A caller hung up after dialing 911. Dispatch attempted to call back but only got voicemail. A search of latitude and longitude revealed the call may have come from Westport.

December 22 - 11:42 a.m. A tree came down and was blocking both lanes of Altoona/Pillar Rock Road. The county road department was notified. 7:53 p.m. A vehicle slid off of SR 409 near Birnie Slough. The driver got a ride home and the owner said he would retrieve it in the morning. 8:10 p.m. State patrol advised that roads were getting very icy because of freezing rain. The ferry suspended service at 8:30 p.m. State patrol said they would not be able to come to Wahkiakum County if needed because roads were bad. 8:50 p.m. Multiple callers on Altoona/Pillar Rock Road reported power outages. A caller on Hoikka Road said they saw a flash before their lights went out. The PUD responded and power was restored at 12:56 a.m. on December 23. 9:48 a.m. A Deep River resident reported that his mouth was bleeding. The person was advised that the Grays River ambulance could be delayed because of the weather.

December 23 - 5:46 a.m. Three residents on Altoona/Pillar Rock Road reported that their power was still out. The PUD was notified. 7:40 a.m. A tree was down and blocking Altoona/Pillar Rock Road. 10:05 a.m. A person in Seattle said a stolen laptop was on sale online out of Skamokawa. 10:33 a.m. A caller said a 50 foot boat was loose and floating in the Cathlamet Channel. The US Coast Guard was contacted. The boat was temporarily secured to a large tree near the Puget Island bridge. 11:56 a.m. The Cathlamet ambulance aided an east county resident complaining of an abdominal issue. 1:24 p.m. The school access road in Cathlamet was closed because of excessive ice. 3:44 p.m. A caller reported a suspicious woman parked in a car for several hours at the Greenwood Cemetery. 5:16 p.m. A large tree came down on Oneida Road. 6:04 p.m. A caller said he put his truck in a ditch on Beaver Creek Road and that he was calling a tow truck. 7:06 p.m. A caller said that the top of a power pole on East Valley Road was sparking. The Skamokawa Fire Department responded. 9:20 p.m. A tree was down and blocking SR 4 on the west side of KM. A deputy and the Skamokawa Fire Department responded. 9:57 p.m. A caller reported a fight in progress at a Cathlamet restaurant. A deputy responded. The victim did not want to press charges but the deputy and state patrol went to visit the subject at his home on Puget Island. 11:44 p.m. A caller reported a rollover accident on Beaver Creek Road and said the vehicle was unoccupied. The caller then said he fell and hit his head and was stuck. A deputy responded but was unable to get to the vehicle because of icy roads and requested assistance from the county road department. A District 4 Fire Department vehicle attempted to respond but got to Cathlamet Road and could not go any farther. The Cathlamet ambulance made it about three miles up Beaver Creek Road before sliding backwards into a ditch. At 1:42 a.m. the Cathlamet ambulance was with the individual. The Cathlamet Fire Department assumed incident command and said no additional units were to respond to Beaver Creek. The county road department arrived on scene at 2:35 a.m. All units were clear at 3:12 a.m.

December 24 - 3:36 a.m. A caller reported that Beaver Creek Road was icy and impassable. 4:03 am. A jeep was partially blocking Beaver Creek Road in Cowlitz County. 5:50 a.m. The Cathlamet ambulance aided a Skamokawa resident who was not feeling well. 9:18 a.m. A disabled vehicle was reported near Nassa Point. State patrol was notified. 11:30 a.m. The owner of an Alger Creek property said he was out of town but heard a large crash on his ring camera the day before. He asked to have a deputy check the property. 1:19 p.m. Water was reported on West Deep River Road. The county road department was notified. They advised that signs were up for the weekend in high water areas and that the water would rise and fall with the tides. The county road department also said that all roads were currently passable with care. 4:21 p.m. A possible drunk driver was seen heading east on SR 4. The driver was stopped and arrested. 5:24 p.m. An Elochoman Valley resident complained about a dog barking. 6:03 p.m. A caller reported that he struck an owl. He called back later to say he got it to fly away. 8:34 p.m. The Cathlamet ambulance aided a Puget Island resident with a mental health issue. A deputy was requested at 8:57 p.m. 8:49 p.m. A power outage was reported in Grays River. The PUD responded and restored power at 11:15 p.m. 9:07 p.m. Two large trees were down on SR 4 in Grays River. A vehicle hit a tree. A deputy, the Grays River ambulance, and the Grays River Fire Department responded. 9:20 p.m. A man was seen walking on SR 4 near County Line Park. 9:45 p.m. A large rock was reported on SR 4 east of Nassa Point. 11 p.m. A caller reported hearing a loud noise and believed a tree might have come down on SR 4 a couple miles west of County Line Park.

December 25 -- 11:02 a.m. A caller said a tree was mostly cleared off of SR 4, but part of it was sticking out past the fog line a couple miles east of County Line Park. 2:42 p.m. A caller reported rocks on SR 4 near the summit of KM. 5:21 p.m. The PUD restored power when US Cellular said their power went out on West Birnie Slough Road. 6:16 p.m. The Cathlamet ambulance aided a Cathlamet resident complaining of back pain.