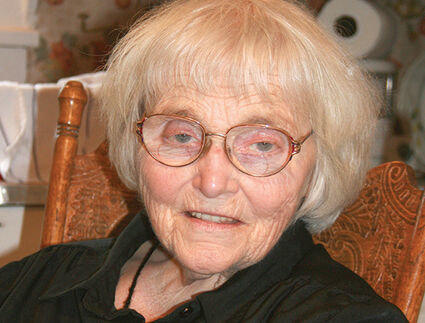 Happy New Year, my friends! This is my third annual writing folder for Eagle articles. We've all been through a lot over the past two years and I hope and pray we're only going higher, happier and healthier. During the past quiet week, I spent time in one of my favorite history books, "Water Under the Bridge" by Ruth Busse Allingham. I particularly enjoyed the chapter on Marie Fauver, one of the first people I visited with when I moved to Grays River in 2005. I first lived in Cathlamet after seeing the area in February of 2003 when teaching a class on grantwriting in Skamokawa. After living in Cathlamet first, I housesat one summer for Steve Puddicombe whose house is right on the upper Grays and I learned there to love Grays River. By late 2004 I had found the half acre I love so much and in May of 2005, I moved into my new home. This year in February, I will celebrate my 20th year in Wahkiakum County. Oh, the joy!

Photo of the week: Marie Klint Fauver, fine historian and teacher of history. Located near the bottom of west KM, on the south side of SR4 is the blue house where she grew up and raised her own kids. The house on the 1886 homestead is full of history itself. It's still the blue color Marie liked. I'll share more of Marie's stories in next week's Downriver Dispatch.

Marie Klint Fauver was a grand historian. She was born in the house where she lived all her life. The chapter in the book that is all about her family's history is fascinating. In her memories there, she gives an account of her wartime childhood we rarely have a chance to hear about. Here are some of her memories of living here in World War II.

"I was born in 1931, my brother George in 1934 and my sister Mabyn Kathleen in 1939. I went to the old Riverside School. The only thing I can remember about that school was the outside toilet the teacher had to take me to. It was alongside the building. In the second grade, in 1938, I went to the new school at Rosburg. The district had expanded and now kids from Eden and Deep River were going there also. We even had flush toilets which the teacher showed us how to work since we didn't have any at home. My dad died in 1941 so after that times were harder. We were lucky the farm was paid for but there was no Social Security for widows in those years so we had to make do by shipping milk to the creamery. There was a milk truck that came around. One of the drivers was Norman Larson. Since mother didn't drive, he would pick up our mail at the post office and leave it in the empty milk can he brought back from the creamery.

During the war years, sugar was rationed. There were ration stamps and with a certain number of stamps you could get shoes, meat, maybe coffee. I remember nailing our shoes back together. Houses had to have blackout or tar paper on the windows in case planes came over so they couldn't see the lights. Gas was rationed, rubber tires were hard to get and silk stockings disappeared. We kept a bucket of sand and a shovel in case of fire and bombs. There were guards around the bridges out in front of the house. If you drove to Raymond or the beach you were stopped at the bridges by the soldiers to check your car and they would ask where you were going.

My mother heard the shooting the night the Japanese came in and shelled the coast off Astoria. I didn't hear it, but it must have been scary for her with us kids to worry about. I was probably in the third or fourth grade when we had drills at school in case the planes were coming to bomb us. We had to get our outdoor clothes on. We would march out in the woods away from the school. If there was an attack, we were to divide into small groups, and we had an older student from our area for a leader. He was supposed to get us home. Thank God, they didn't invade us. My friend, Virginia King Wendelin and I still laugh about stories of our childhoods. She is the granddaughter of an earlier pioneer, Patsy Cook, who homesteaded in upper Grays River. She was older than I was. I was always interested in their old barn. Her grandfather, Patsy Cook, and the boys hewed out the timbers with an adze and an axe. She speaks of earlier years having to wade through the flood water from school and she would be so scared because the dog salmon were all around her. Sometimes her dad would meet them (the three kids) with a wagon."

I haven't received information on new activities other than the Skamokawa Swamp Opera concert on Sunday, January 22 at the Naselle Community Center at 3 p.m. I hope they sing my favorite song of theirs, "Sheriff's Report." It's so fun! Comet basketball has started. The games will get you out of the house and help January pass by if you'd like to attend them. Email Marie Green, Athletic Director, at the following email: mgreen@naselleschools.org, and she will add your name to her list of folks who receive her weekly athletic schedule on Mondays.

January 17: Naselle GRV School Board meeting at 6:30 in school library.

NOTE: The deadlines for The Eagle are now on Mondays at 5. Get notices of coming events to me by noon so I can get them in the next Eagle.