The Town of Cathlamet's Butler Street parking lot is open to the public until the second phase of development starts later this year. So far, parking use has been light.

The parking lot on Butler Street is paved and painted now, but grumbles at the Town of Cathlamet meeting last week regarding the process and its somewhat unsatisfying results prove it continues to be a source of vexation.

An EV station has yet to be installed, and plans for a kiosk are still in the works, but according to Town Council Member Robert Stowe, the lot has already cost the town $600,000.

"The way it looks now it's a fait accompli, we're stuck with it pretty much," Stowe said. "I truly cannot get over a $600,000 bill for a parking lot. If we had simply gone in there, paved the damn thing over and painted stripes, we'd have had more parking and it wouldn't have cost us anywhere near this amount."

A conceptual design by West Studio was initially approved by the town council, but the town later needed assistance from engineers at Gray and Osborne, Inc. and an EV consultant, all at additional cost, for a design that was compliant with ADA standards, according to Mayor David Olson and Town Clerk Sarah Clark, who summarized the undertaking.

Olson made an executive decision to approve a different and final design, which included two parking spots directly off of Butler Street. The whole matter had one council member wondering what went wrong and another wondering if the mayor had disenfranchised the town council.

Olson said he made the decision knowing the council wanted to maximize parking spaces, adding that the costs were going up every month and if he had not done so, the lot would not have been built last year.

"Why wasn't West Studio's approved design not construction ready?" Council Member Jeanne Hendrickson asked. "Why did the preliminary design not address ADA access to the EV charger? Did we get what we paid for? Did they do a good job? I would love to have them in the room right now to ask these questions. We hired them to do this and we repeatedly had to have things have done and changed and we repeatedly paid them more and more money for these changes."

"I was highly disappointed," Hendrickson added. "If this is the goalpost theory, then I have no confidence in the procedures that this council is doing with our projects now and in the future."

Council Member Laurel Waller had another concern, and that was how the council's approved design was changed on the go ahead by one person.

"I would have come to special meetings to talk about it," she said. "Sometimes I think the council and the town are opposing teams and I don't particularly care for that. I can come up with a bunch of examples of when all the sudden the council didn't matter."

"You can say we prioritize parking not over this that and that," Waller added. "If we took one place out so that a car could go there, but it kept it safe, I would have voted yes, throw that piece out, perhaps we could have a bicycle rack there or something else, or move motorcycles around, or is there something else can be done. At least we would have agreed to it. That's the part I have issues with."

"This is a teachable moment for me and the town," he said. "In terms of moving forward with the waterfront park development to make sure we have a handle on this, and we project manage this from day one." 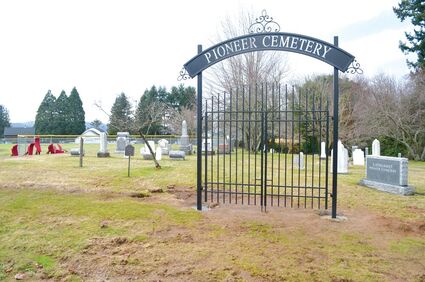 Improvements are being made at the Pioneer Cemetery in Cathlamet, thanks to the Town of Cathlamet and a $20,000 grant from the Washington State Historical Society. According to a December 9, 2021 story in The Eagle, the town will contribute $60,000 to the project. Wrought iron will replace the former chain link fence, and a Chinookan memorial will be installed in partnership with the Chinook Indian Nation.

The mayor then introduced Wahkiakum Chamber of Commerce Director Monica Budd and Assistant Chamber Director Dan Lorenzen. They presented different options for an informational kiosk at the new parking lot, including a basic kiosk stocked with brochures all the way to a digital kiosk with a roof.

Stowe said the idea of an interactive digital kiosk was great, but had questions about the costs for upkeep and repair, and wondered who would be responsible.

Council Member Kermit Chamberlain had a similar concern, and asked if the kiosk would benefit the 500 or so people who live in town or the local businesses, and if that should determine who pays for it.

In other business, a bid of $176,065.83 from Hamer Electric was approved by the council for a project to install a back up generator at the Wahkiakum water treatment plant. The total cost of the project, including engineering, is $255,155, which will be covered by a federal ARPA grant in the amount of $159,829, with the remainder budgeted from the water fund.