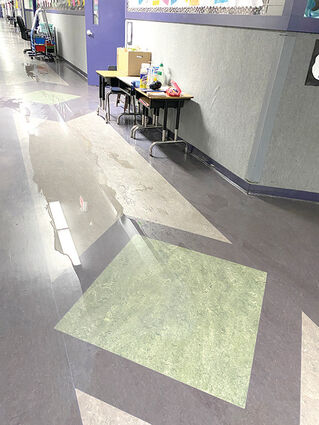 Water leaked from two breaks in a radiator pipe in a Wahkiakum School District classroom over the holiday break, flooding the room, and sending a river of water down the hallway. Courtesy photo.

Outside pipes burst in the bus garage and the grandstand two days after the big freeze taking Maintenance Supervisor Paul Lawrence, Transportation Supervisor Calvin Grasseth, and David McNally from the Town of Cathlamet away from their families on Christmas morning to contend with the issue and get it all shut off, according to Superintendent Brent Freeman.

Freeman visits the facilities regularly, and did a walk through that Christmas Day and the following day, a Monday. There were no indications of any damage inside.

On Tuesday morning, it was a different story.

Water filled the hallway, and it was coming from Jamie Cothren's first grade classroom at J.A. Wendt Elementary School. Inside, the water was about four inches deep.

Later, more flooding was discovered at the far end of the hallway in the speech room.

Freeman explained that the main water lines that run through the heating system burst in five different spots, in two places in Cothren's classroom, and in three places in the speech room, resulting in inches of water in the classrooms.

"It looked like a battle zone," Freeman said. "Custodians did a great job getting in here doing damage control. It was a miracle that they are back using the room."

Freeman doesn't believe the problems with the heating system were related to the freeze.

"This is an old pump system and we think the pump may have gotten into a pulsing, or pressurization, and it put too much pressure on the pipe and blew it out in weak spots," he said.

More problems surfaced. They were unable to shut off the water in two places in the building for one reason or another, and ended up having to call the town to shut it off at the curb.

On Tuesday night, they had no water and no heat, and the temperature was dropping.

After the water was cleaned up and the power was back on, Rob Brown, a local plumber, was able to seal the pipes in the speech room, and the system was bypassed in Cothren's room.

But then they couldn't get the boiler fired up and had a pump failure.

The system, which was installed in 2001, is old and inefficient, Freeman said.

Freeman knew he would have to call the school board if they couldn't get the system up and running by Thursday night, with students returning in a few days from the holiday break, but somehow they were able to get it going, and it started to warm up inside the building. 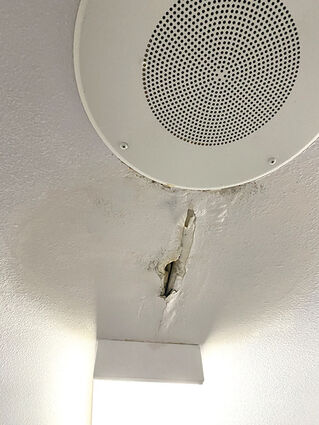 Roof failures led to a leak in the ceiling at J.A. Wendt, evident in this picture, and in many other places along the corridor of the elementary school. Courtesy photo.

"It's a temporary fix until we can get something else," he said. "The real irony on this, I was working with Apollo Solutions on a grant to fix this."

After all that, Freeman would get yet another call a few days later from electricians working on the new security system.

The roof was leaking and they were reporting a whole lot of water.

The damage was extensive, and there doesn't seem to be an easy fix for an elementary school with an inverted roof.

"This was a big leak amplified by freeze, in an old system that has deteriorated," Freeman said. "We've done several roof explorations, but right now we don't have a grant to go after that, even though it is a significant issue, though not as significant as the heat.