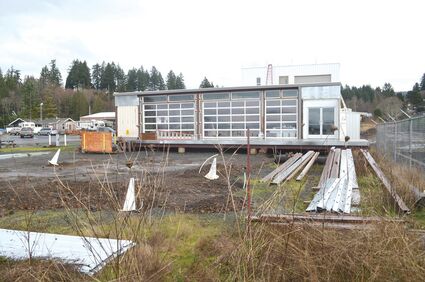 River Mile 38 Brewery's opening day is getting closer. Construction is nearly completed, and the new restaurant at the waterfront is expected to open sometime in February, provided there are no major delays in the process, according to owners Javier Sanchez and Rex Czuba.

Wahkiakum County Port 1 Board of Commissioners agreed to continue managing County Line Park and learned that their insurance company approved a claim which will cover repairs after the dredge sank in November.

Commissioners approved a resolution renewing an interlocal agreement with Wahkiakum County for County Line Park. The property belongs to the State of Washington, is leased by Wahkiakum County and managed by the port. County Commissioners increased their support to the port for management and operation expenses by $500 for a total of $4,000 a year, according to Port Manager Todd Souvenir.

Souvenir said that the port's insurance company approved their claim for the dredge, after it and the port skiff sank in November. After a $1,000 deductible, the port will receive $15,092.77, which covers more than $12,000 for repairs to the two vessels, $810 for attorney fees, and $3,000 to move the dredge. According to the claim, high wind and waves caused the dredge to lose mooring and sink. Commissioners authorized Souvenir to sign the claim.

A dredge sounding is planned to assess depths in the marina and the nearby channel to see what the port has gained or lost since they last dredged, in order to make an educated decision about how to move forward with the dredge, Souvenir said.

The port has been busy with several projects, including moving the A-frame cabins, a utility upgrade on the dike and river view areas, and insulation of the yurts. They are awaiting the delivery of a replacement for C Dock, and making plans for a new fish cleaning table.

Souvenir said he was meeting with someone to look at designs for the new table, and hoped to have a drawing and more information next month. 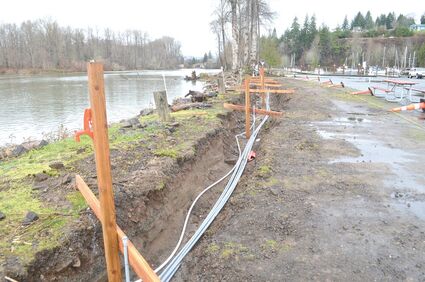 Wahkiakum County Port 1's project to electrify the riverview area and the dike beyond is nearly finished.

"I think it's pretty exciting," Souvenir said. "It may be a small project, but I think it will be nice and an improvement for everyone who utilizes it."

Cathlamet Mayor David Olson was in attendance. He spoke about the town's waterfront park project and said they hoped to work with the port on the enterprise, which he expects will take three years or more to complete.