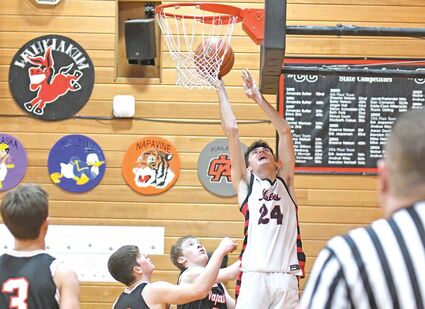 Kyler Sause fights for his shot in the Mules' game with Napavine.

"Brodie has put more time in the gym than anybody since I've been coaching," Coach Todd Souvenir said. "I'm really proud of him and happy for him to achieve those individual goals, but I know for him, the most important goals are upcoming and in front of us and all team oriented. It was cool to see the team support him and be excited for him in those moments."

The Mules split games this week at home, with a loss on Thursday, followed by a win on Saturday.

"We knew they were good defensively, and have a couple good offensive pieces," Souvenir said. "I thought we did really good defensively through three quarters and I was really proud of the guys. Overall, playing one of the top teams in the league, it was a positive. It was a loss in the column, but I think the guys need to look at the game as we improved and prepared ourselves for the district tournament. It was a really good game for us, it challenged us in different ways. I thought we improved in that game for sure."

The Mules added to their win column on Saturday, beating Toledo 59-49. 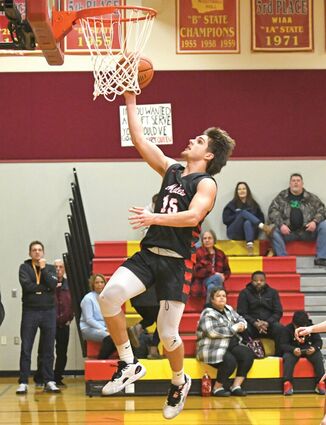 Zakk Carlson scores on the fast break for the Mules.

"Toledo always plays good defense," Souvenir said. "They keep you out of the key, they contest every shot and they rebound really well. Nothing comes easy. I was a little worried about it. We didn't have our best offensive night of the year. We fell behind 8-0, called a timeout, and the guys managed to regroup and went on a 12-0 run. They took the lead and never looked back. I told the guys after the game that it definitely wasn't the cleanest game offensively, but again, we won the game because of our defense, which has been a theme throughout the season. Eventually our offense will catch up with what we are doing on the defensive end.

The Mules traveled to Adna on Wednesday to face a tough Pirate team, but the score was not available by press time.

They host Onalaska on Friday and travel to Toutle Lake next Wednesday.