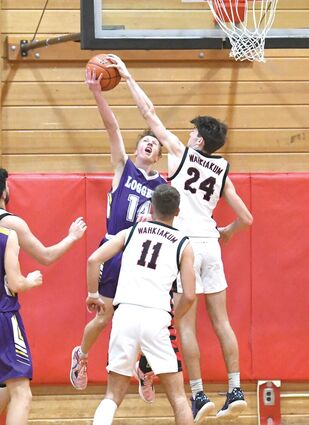 On Wednesday, the Mules traveled to Adna, and after falling behind early in the game, Wahkiakum hit some big threes and took advantage of Pirate fouls to pull even and then ahead, with two Mules combining nine for nine on the free throw line. The Mules won 63-54.

"That was a big game for us," Coach Todd Souvenir said. "I thought the guys did a really good job. We came out and they got a 16-8 lead on us to begin the game. After some adjustments our defense got settled in, and we went on a good run in the second and third quarter. The guys had a lot of fun and I thought we moved the ball really well. It was a fun game and put us in a good position moving forward."

"We put Kyler [Sause] on their best player, and his length really bothered him," Souvenir said. "Kyler did a great job defensively."

"We got off to a sloppy start but we continued to extend our lead throughout the game," Coach Souvenir said. "We got more comfortable offensively in the third quarter, scoring 20 points. I think we did a lot of good things as far as finally settling in and getting the ball inside and finishing around the rim. We definitely struggled from behind the arc but we got some second point shots. I thought Zakk [Carlson] did a good job of that. He was 10 for 16 on twos, Dom [Curl] was four for six, and Brodie [Avalon] was three for five." 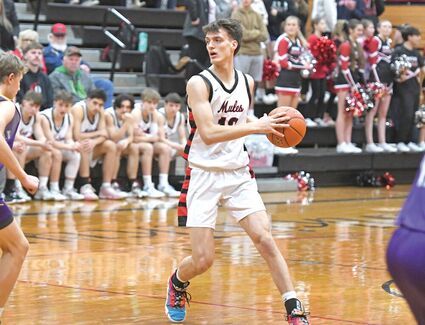 Titan Niemela prepares to pass to a Mule teammate.

The Mules traveled to Toutle Lake on Wednesday, but a score was not available by press time. Check The Wahkiakum Eagle Sports Report on Facebook for updates.

The Mules host Kalama on Friday and Morton/White Pass next Thursday.

The boys are currently in third place in the central 2B league with an 8-2 record, and the WIAA RPI has them ranked sixth in the state amongst 2B teams.

Brodie Avalon was named one of WIAA's Athletes of the Week last week. Avalon scored 43 points against Winlock on January 10, which tied a school record for most points in a game, and the senior recently surpassed 1,000 career points.