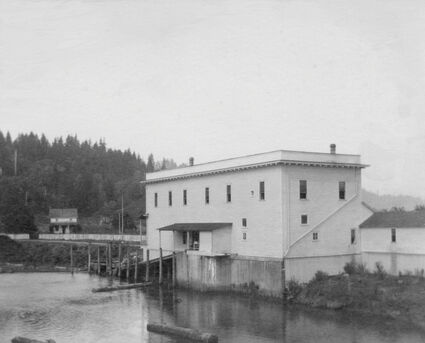 Thanks to Bonnie LaDoe who sent this photo of the Walker House on the left in Grays River. To the left, you can see where it's placed across from Meserve's Store that was built on pilings on the Grays.

Sunday's Concert: It's a lovely Monday with fog lifting and sunshine coming through. A good day to smile and remember the wonderful concert yesterday at the packed Naselle Community Center with the Skamokawa Swamp Opera group. I was so happy to hear the Sheriff's Report song first thing and then the Sheriff's Report Volume Two at the end. Folks came from Raymond to the west and Puget Island to the east. The group sang for an hour with songs of Finland and the region, giving the audience a wonderful afternoon. Congratulations to the FAFF (Finnish American Folk Festival) Board and volunteers. The building was full with overflow guests sent up to the balcony. The new heat system was installed just the day before, so the former sanctuary was toasty and bright with light coming in the beautiful stained windows. Old friends who had not seen each other for a long time reunited at the reception afterward in the basement hall. O the joy!

Naselle Community Center: When remembering how long FAFF has owned the former Congregational Church, it's amazing how much they have done to update and improve the building. Through grants and fundraising, there is a totally new septic system, a new heating system, and a donated baby grand piano. A stage has been discussed several times and I hope it will happen, partly because yesterday, if sitting in the back, the performers were hard to see. I know the building used to be a church and some hope to keep it in that format structurally, but like a baby that changes so fast, the new Community Center's purpose is more than a church now and a stage would get performers or actors, higher than the lower level where they were yesterday. It would make the sound go out better and let the audience fully appreciate those offering their talents to the community. I want to applaud FAFF for taking on the gift of the church building and yesterday's performance was a fine illustration of all the new Community Center can offer us in the arts.

Photo of the Week: It was so kind of Bonnie LaDoe to send the rare photo of Grays River with Meserve's Store in the forefront and the Walker House to the left across the highway. As mentioned in last week's Dispatch, it would be very appropriate to try to save the Walker House as a historic site. Duffy's Pub, still going strong, has been the spot of many businesses, including an auto shop. The town's blacksmith shop used to be west of Duffy's where there is now a small building built by Salazar who owns Duffy's. I will be gathering information for you on Meserve's Store that used to stand on pilings adjacent to what is now Loop Road. The lower level of the building was a store where boats tied up to the porch at high tide and passengers stepped up to disembark right onto the porch. The upper floor of the building served many purposes. At one time, it had a stage and plays were held there. Then at some point it held two bowling lanes so it was a very popular place. Mrs. Harriet Meserve at one time printed the "Grays River Builder" newspaper for many years. Actual copies of the Builder are available at the Appelo Archives Center. As I remember, a set of Builders were given to the Archives Center, if I am remembering correctly, by Friends of Skamokawa when Irene Martin and Carlton Appelo were making decisions about who gets what and where things will reside. Carlton had a habit of "borrowing" things like photos and sometimes the task of "returning" them got lost in translation, so's to speak. Mrs. Meserve set the standard of the day (early 1900's) of reporting rural news such as family visitors in the Valley, gatherings, who was ill, who traveled to shop in Portland, who graduated, who married and how many cows a farmer might have. She and her husband were strong community members. One story is that when her husband was a State Legislator and it came time to vote as to whether the Ocean Beach Highway (SR4) should run along the water through Brookfield, or turn into the Skamokawa route over KM. Mr. Meserve voted for the KM route because if the road were built along the water, his store would lose too much business. At least he was honest about it!

Reminders: Sports Picture Day at the Naselle GRV School will be on Friday, January 27 if you'd like to have a chance to take your own photos of the sports teams. The Naselle Clinic has a Caregivers' Group meeting on the first Thursday of each month at the Naselle Library from 1-2. Ocean Beach Hospital is sponsoring a free "Weigh-In" group that started last week with 32 folks signing up. I'm told that if only six people from our area sign up for another group, it will meet starting in late February or March at the Naselle Library. I signed up for number one. I hope others will do so as well by calling Molly at OBH at 360.642-6308.

January 29: FAFF's annual budget meeting as well as an election of officers at 2:00 p.m. for Naselle Community Center and at 3 for FAFF. Both meetings will be held at the NCC.

February17: School Board meeting at 6:30 in school library.