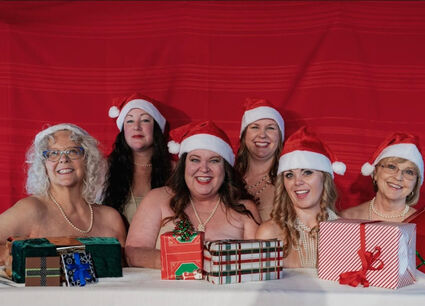 The play is a fictionalized version of a true story from Yorkshire, England, where a group of mature women from the Women's Institute created a tastefully nude calendar to raise money for cancer research after the husband of one of the women died of non-Hodgkins lymphoma. The 2000 calendar was a hit beyond their wildest expectations.

The original calendar featured 11 members, who covered their modesty with pianos, flowers, teapots, song sheets and sewing. The stage version reduces the core group to six.

Odom plays Ruth, who always tries to do the right thing but often gets it wrong. She's a gentle peacemaker and anxious to please, but is reluctant to step outside her comfort zone. She calls her two-timing boyfriend "My Eddie."

Lawrence plays Cora, a single mother of a rebellious teen daughter. Although Cora's father was a vicar and she was raised in the church, you wouldn't know it by her salty British oaths such as "bloody."

Odom joined Stageworks after seeing Lawrence in the Stageworks play "Clue" in September. It was Lawrence's return to the stage after almost 25 years away. Odom had done theater in high school.

"Feeling that electricity made me recall the fun of being in community theater," she said. "There's a lot of sacrifice that goes into (being in a show). Until you're a part of it, you don't realize how much goes into it. I'm so appreciative of my husband, my son and my parents."

Like the women they portray, the cast has formed a bond, and they supported each during the weeks of rehearsal while the outside world pummeled them with sickness (their own and family members') and tragedy - including the collapse of Lawrence's beloved Dutch barn in a winter storm.

Odom said the show has given herself and her character "so much perspective on friendship and adulthood." As one of several cast members making their Stageworks debut, she felt "instantly embraced into the community. You're a part of the team."