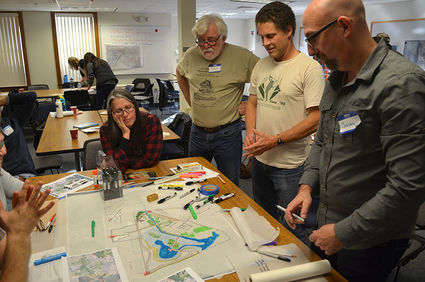 Kerrie McNally, Bob Kizziar and Andrew Emlen share ideas with their group, which was working on a natural vision for a park.

When the new wastewater plant was constructed and the sewer lagoons emptied, the Town of Cathlamet was left with the question of what to do with the three acre site along the waterfront.

One popular thought was a park, so they applied for and were awarded a grant through the Rivers, Trails, and Conservation Assistance Program of the National Park Service (NPS). The grant brought planners and landscape architects from NPS to town to help TOC, their partners and the community through the process of planning a park and finding ways to fund it.

NPS staff met with students, created a survey, and met with the committee to narrow their vision and plan the workshop, where community members would be invited to take part in the design of the space.

Last Saturday they held an all day planning workshop to come up with three potential park concepts.

"I think it was pretty productive," Kerrie McNally, the Clerk/Treasurer for the Town of Cathlamet said on Monday. "It was a good diverse group."

The three visions for the park were already defined, if not drawn, on Saturday morning. One group would focus on coming up with a natural concept for the space, the second group would give the park a more developed design, and the third group would create a hybrid of the first two.

The energy level was pretty high in the River Street Meeting Room on Saturday afternoon. People were talking and looking at magazines for ideas at three separate tables as they threw out and drew out their thoughts with the help of landscape artists. Finally, everyone got a chance to look at all three designs. They marked details that they liked and voted for their favorite design.

All three designs incorporated a performance venue and access to the waterfront. 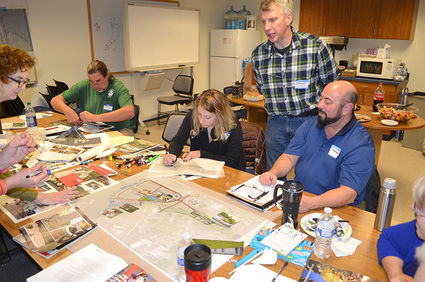 Community members met with National Park Service employees and landscape architects to come up with potential designs for a park in Cathlamet that could find a home at the site of the former sewer lagoons.

When the workshop was over, the room was opened to the public, to give the community an opportunity to see the work that was done, comment, and finally vote on the concept that they liked. Only three people showed up.

The hybrid version got the most votes.

According to McNally, the National Park Service staff took pictures of all three concepts. They will create more professional graphics of the designs and submit them to the Department of Ecology and other governmental agencies to see if all the ideas meet legal standards.

McNally said NPS will incorporate the most popular ideas into a document and set up another meeting with participants in this project to go over results.

Other questions remain, including the issue of park maintenance, but they are taking the project one hurdle at a time.

According to McNally, NPS will also try to help locate funding for the park.

"They were able to find $1.5 million for a park in Washougal," McNally said.