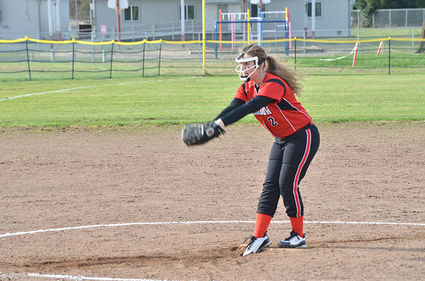 Aubrie Montgomery picked up some experience on the mound in the Lady Mules loss to Adna on Thursday. The young team is learning new skills every day.

Jordyn Watson pitched for the first time. On offense, she hit a triple and a single. Destiny Curl went 2-2 with two singles, and Cecilia Williams drove in a run.

"The girls are improving immensely," Coach Green said. "They really did a great job of staying positive and working together." 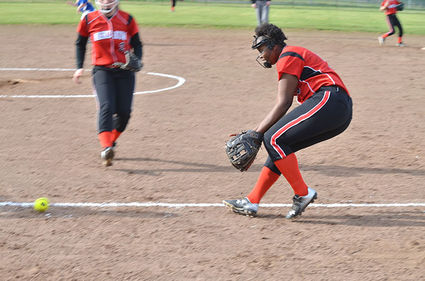 Cecilia Williams fields the ball before tagging the runner to first base.

Watson started on the mound, and Aubrie Montgomery took over when Watson complained of a sore arm. Watson was moved to catcher, where she made several outs. According to Green, Curl did well at second base, and MJ Neves made some really good choices at short stop.

Two more girls took the mound for the first time. The team continued to learn how to deal defensively with opponents stealing bases.

"The girls connected with the ball," Coach Green said.

The Lady Mules return from spring break to play a double header at home on Tuesday, April 10 against Winlock.

April 9--This story has been corrected for correct identification of Aubrie Montgomery.