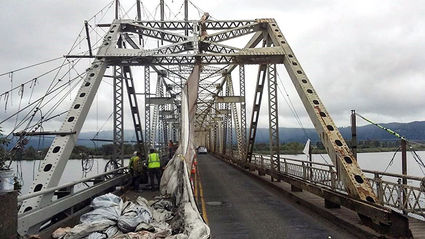 Before and after: Painting contractors have finished one section of their work on the Puget Island bridge. Above, the new paint is on the left, and the old is on the right. Photo courtesy of the Washington State Department of Transportation.

Painters on the Puget Island bridge last week completed work on their first section and are moving curtains to begin work on the next portion.

The subcontractor who will replace roadway decking on the bridge will mobilize on July 9, Tamara Greenwell, Washington Department of Transportation (WSDOT) communications officer, reported this week. They'll do much of their work at night, 9 p.m. to 4 a.m., Monday through Friday. During that time, the bridge will be closed to traffic.

"It is still too soon to tell when the bridge closures will begin, but we will certainly make sure area residents know in advance of the closures," Greenwell told The Eagle.

Also, WSDOT will realign traffic lanes and lower the speed limit on SR 4 in the Cathlamet area.

Improvements will be done in stages, Greenwell said.

"This summer, we'll be re-striping SR 4 through the Cathlamet," she said. "As part of that work, we will convert the eastbound passing (right) lane into the through traffic lane.

"We will convert the existing middle lane into a middle striped median and use part of that to create a left turn lane at the school access road and a two-way left-turn lanes through two other intersections.

"The shoulders will be a foot wider for bike/pedestrian enhancement.

"This revision will still leave approximately one mile of passing lane east of Cathlamet."

Officials from Wahkiakum County, the Town of Cathlamet, and the Wahkiakum School District have asked WSDOT to lower the speed limit to 35 MPH in the area.

"To reduce the speed limit to the desired 35 MPH, the highway needs to be physically altered to look more like an urban landscape, which indicates to drivers that they need to slow down," Greenwell said. "The city and county are working together, applying for state and federal grant money to try and fund these improvements."