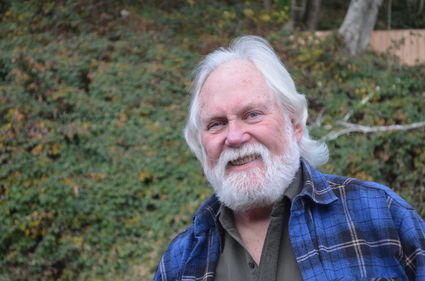 Local writer Robert Michael Pyle has two books out this year: his first novel and a revised edition of The Butterflies of Cascadia, first printed in 2002, now titled Butterflies of the Pacific Northwest. Pyle will be reading from his novel on Saturday, December 15, at 2 p.m. at Redmen Hall in Skamokawa.

Grays River writer Robert Michael Pyle's latest book tour is winding down, but lucky Wahkiakum residents can hear him read from his first work of fiction at Redmen Hall in Skamokawa on Saturday, December 15.

Nearly five decades ago, inspired by a book about a butterfly, Pyle found himself wanting to tackle a novel.

"I wanted to write a fully realized human novel but with an animal as an important part of it, as a lever, a fulcrum for the story, but not stealing the stage from the people," Pyle said. "It became an experiment to see if that could be done. As it evolved, the experiment refined. I know there are some of my readers who don't read fiction. I wondered if I could get one of those people to read a real novel. And there are people who read fiction who don't read much non-fiction, certainly not natural history non-fiction. I wonder if I could get them to sneak in a little stealth nature writing?"

It took 44 years, but his dream was finally realized when Magdalena Mountain was published this year.

It wasn't his only book to be published in the last 12 months. A new edition of Butterflies of Cascadia, originally printed in 2002, was re-released with some updates and revisions as Butterflies of the Pacific Northwest.

"Just like when I started the novel in my graduate school days, the one book, Butterflies of the Pacific Northwest, was exercising my more analytical, fact based side, and the other, Magdalena Mountain, was exercising my imaginative side," Pyle said. "Wouldn't we all like to be able to do that?"

"Nabokov called it the high ridge," Pyle added. "It's where the mountainside of scientific knowledge meets the opposite slope of artistic imagination. It's a really way of talking about being whole people, honoring both our artistic sides and our practical sides. So often we are forced by our work or our natural inclinations to honor one and not so much the other. We're lesser for that. I'm a very lucky man in my work, to be able to do both. I'll do that today when I go home. I'll spend a little while working on a poem and I'll spend a little while working on a butterfly science oriented project. I like to go back and forth between them. They make me feel like I'm exercising my whole self."

During those 44 years there were 10 rewrites, and a lot of friends and a few publishers read the novel.

"The first three drafts had about a dozen readers," Pyle said. "They were friends of mine who do read fiction. They knew me and loved me well enough to read it, but didn't love me so much they were going to lie to me. False praise is worse than anything."

With each reading came suggestions.

The beauty of those pages describing the natural world on Magdalena Mountain and the life of a butterfly as it shifted through the seasons come as no surprise. Pyle has built a life on that writing.

Breathing life into the human characters was the real challenge.

"A lot went, and a little came in," Pyle said. "The characters evolved, but the landscape part? The butterfly part? That is pretty close to what it was in the early drafts."

Magdalena Mountain had been read by a few publishers over the years, but it didn't find a home until Pyle met Jack Shoemaker.

The two were at FISHTRAP, a writing conference in Wallowa County, Ore., when Shoemaker, who has published works by Gary Snyder and Wendell Berry, mentioned he was glad to be Pyle's publisher.

"Maybe you want to take a look at my novel?" Pyle asked him. "He didn't know me as a fiction writer, but he said he would look at it. That was a lot to get right there."

"It's been a long journey," Pyle said, "not just in writing but in publishing. There was not a lot of rejection, but some very important rejection, and some extraordinary help along the way."

"I'm very happy with the publisher that I have. Jack Shoemaker is an old pro, a real respected person in American publishing. He's been around for a long time and started several presses."

Pyle will read from his novel on Saturday, December 15, at 2 p.m. at Redmen Hall in Skamokawa.