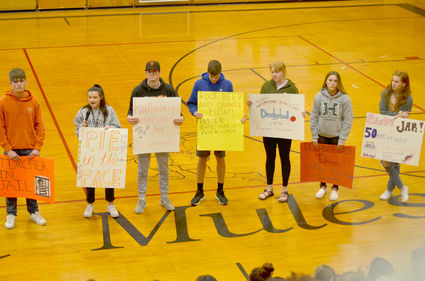 Story and photos by Diana Zimmerman

Doernbecher Week has become Doernbecher Days at Wahkiakum School District as the Key Club and students will spend the rest of March raising money for Doernbecher Children's Hospital located in Portland.

Wahkiakum sophomore Beau Carlson was at Doernbecher recently, recovering from an infection that followed a traumatic brain injury. His mother, Leihanna Carlson, was at the high school on Monday to start off Doernbecher Days by sharing their experience at the hospital.

"When we went through that dark period of time with Beau, we weren't sure how things were going to come out for him," Carlson said. "We had so much love and support daily from all of you. It meant more than any of you will probably ever know."

"At a football game September 7 of last year, Beau received a traumatic brain injury in the middle of a play," Carlson said. "Beau did not get up. He was taken to Harborview Medical Center in Seattle where he underwent a lifesaving operation. He had a huge amount of swelling of his brain. We truly didn't think that Beau was going to survive that evening. So a month later, we left Seattle. We came home for two very short days. That's when Doernbecher became a big part of our life.

"Beau had come home healthier than he started, but nobody expected this infection," Carlson said. "The beauty of what happens at Doernbecher Children's Hospital is that everyday they are evolving in their science and the way they do things whether it is cancer, a traumatic brain injury, epilepsy, the list could go on."

"What I need everybody to understand, what I truly didn't understand, is the depth of what takes place at a place like Doernbecher Children's Hospital," Carlson said. "I remember there was a point in time where I had been up for roughly 40 hours and a sweet nurse had come in and allowed me to step away for five minutes because Beau had finally fallen asleep.

"I was able to walk out and be in some sunlight and see the sky bridge. I walked around the corner and I was standing at the elevators. It was around 6:30 in the morning and I saw all those children start to pour in for their treatments, for their visits. The children that were suffering with cancer, that had lost their hair. Some of them had to have a hand or a leg removed. It made me feel all of the sudden that we weren't alone in what we were going through. I vowed I would be active in fundraising for them."

"For every penny that you collect for this fundraiser, 100 pennies makes a dollar," Carlson said. "A dollar leads to another. Every dollar matters. It supports families when they are going through what we had gone through. It allows families that don't have the means to stay with their children to do so. It helps them develop more in their science programs. It even helps support animals on the floor that bring comfort to children. It's really important that people continue to give to such a cause. The biggest reality is that every single day there are children that are sick and they need treatments and they need therapies and it's not stopping. Every day Doernbechers is full of children that need that extra help and the families that need that support.

"At any moment this could affect your family or someone that you love. I never thought that we would be those people and we were. 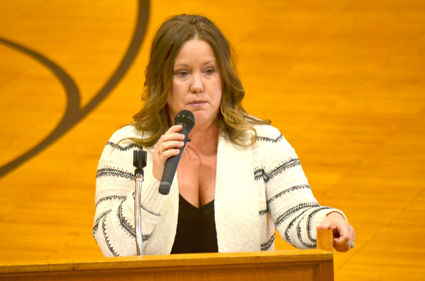 Right, Leihanna Carlson spoke about her family's experience with Doernbecher Children's Hospital. Carlson's son Beau, a sophomore at Wahkiakum High School, spent some time there recovering from an infection after he suffered a traumatic brain injury in a football game in September.

Key Club members have several events planned for the rest of the month. High school students will use money to vote to put teachers in jail, or in other words, get a free period. A teacher at J.A Wendt Elementary School and another at John C. Thomas Middle School will get a pie in the face, as K-8 students use their dollars to vote for which educator they'd most like to be on the receiving end.

There will be a hallway dance for high school students on March 28, and root beer floats will be available for $1 from March 12-15, for all students. Student will also have an opportunity to guess how many pieces of candy are in a jar.

On March 18, there will be a dodge ball tournament in the high school gym. There are several brackets, including an adult bracket. Teams are limited to eight people. It's $5 per person and $20 for jail breaks. There will be prizes for best costumes and for first place.

Finally, they will have the annual Doernbecher Dinner and auction on March 26 at 6:30 p.m. Tickets are $25. The Key Club is still looking for items to auction.