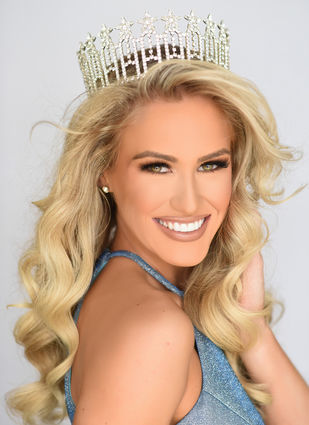 She leaves April 21 for Reno, Nev., to compete in the pageant.

"Its a drop-in event so stop by any time and stay as long as you like," said Leah Clark, Evelyn's mother. "Enjoy visiting with Evelyn; leave her an inspirational good luck note to open during her rehearsals; enjoy some cake, and take some pictures."

Evelyn first entered pageants with the National American Miss Pageant (NAM) in 2001 as a 10-year-old. Leah Clark said Evelyn fell in love with the pageant experience--the sisterhood, love, acceptance, support and friendship the girls develop. The experience gave her self confidence and knowledge, Leah Clark said.

Evelyn entered NAM again in 2004 and 2007. She was third runner up in the 2009 Miss Teen USA contest and finished in the top 10 in the 2010 pageant. She took time off to finish high school and earn a paralegal degree at Clark College, Vancouver. She is employed by a Bellevue law firm.

Evelyn grew up in a commercial fishing family, spending every summer fishing in Alaska, and she purchased her own set net site and permit in 2012.

Evelyn first entered the Miss Washington USA contest in 2012, and during the next seven years, she would earn a spot in the top five a total of six times.

And last November, she finished first and was crowned Miss Washington USA.

"Evelyn learned respect, self-confidence, strength of character, courage to never give up, independence, an unshakable belief and acceptance in herself and a desire to succeed during her journey," Leah Clark said. "Evelyn loves sharing this mindset by mentoring and encouraging young kids to be respectful, confident, and to never give up."