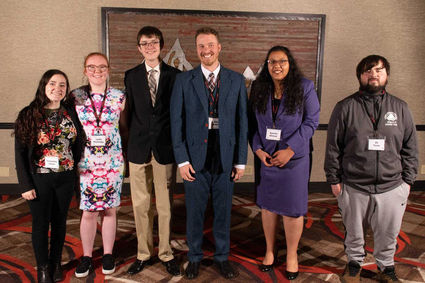 Mitchell Levy of Kelso earned a bronze medal in IPDA debate. After accumulating an impressive 4-2 record in preliminary rounds, Levy was eliminated by split decision while affirming the resolution "the United States Federal Government should significantly reform policy regarding the storage of nuclear waste." Levy also competed in Informative, Impromptu, and Extemporaneous Speaking.

Lydia Partridge was awarded the Warren-Dahlin Fellowship Award. This award is presented to the student competitor who best exemplifies the spirit of competitive speech and debate. Partridge competed in IPDA Debate, Prose Interpretation, and Impromptu Speaking.

LCC alumna and Mount Hood Community College coach Shannon Valdivia was given the Collie-Taylor Fellowship Award, which is given to the coach who best exemplifies the finest qualities of a Phi Rho Pi educator. Valdivia competed on behalf of LCC at Phi Rho Pi in 1990, and has since made an incredible impact as a judge and a coach.

Coach Alex Brehm was elected regional governor of Phi Rho Pi for Region IX. He will serve this region, which represents Oregon, Washington, and Northern Idaho, for the upcoming term.

This tournament concludes the 2018-2019 speech and debate season for the Fighting Smelt. The team will be losing Partridge, who will be transferring to Western Washington University, and Cohen, who will be pursuing a diagnostic medical sonography degree at Spokane Community College. Levy, Ahmed, and Tovar will return for one more season with LCC and hope to build on this season's success.