NHS seniors look forward to their next chapters 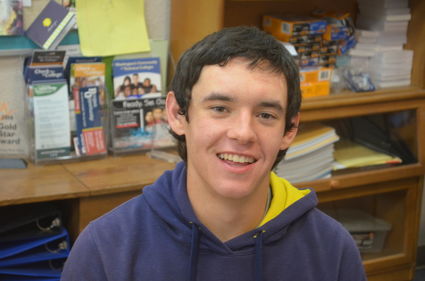 The school’s counselor, Justin Laine, had some good words to share about the two.

“I would have to say that Cole and Jacob are two of the highest achieving and most well rounded students I have ever worked with during my career,” Laine wrote last week. “I have worked with some exceptional young men during my 19 years in Naselle and would rate both of them in my top five in terms of academic, athletics, citizenship, and leadership. They are exemplary young men and role models.”

“Both are hardworking, conscientious, and self directed students,” Laine continued. “They are also both extremely respectful young men who treat all others with dignity and respect. Both Cole and Jacob have very clear college and career paths. I expect both to make substantial contributions to their respective colleges, career fields, and communities. They are truly exceptional young men who will leave enormous voids in our school. We will truly miss their citizenship and leadership in our school and community.”

Cole Dorman, who is graduating with a 4.0 GPA, is the valedictorian for the Class of 2019 at Naselle High School.

“It was some late nights studying, because I’ve been involved with football, baseball, and basketball,” Dorman said. “It definitely took some hard work but it pays off in the end.”

He’d had some early success and just went with it.

“I kept getting A’s,” Dorman said. “I thought I might as well keep on getting them. If you’re going to do something, you might as well do it well. I worked hard for the grades I got. I think I’ve got a pretty good work ethic. My parents didn’t pressure me, they were just proud of me doing well in school. They weren’t expecting me to get all A’s, but they wouldn’t be proud of me if I got D’s and C’s.”

Sports taught him to work hard, that and his faith.

“I thank my Lord and Savior Jesus Christ for dying on the cross for me,” Dorman said. I think He might have given me that talent and work ethic. I thank Him for that, and that place that he’s put me in and blessing me with a great life.”

“There are a lot of good teachers here, but Rob Dalton is my favorite,” Dorman said. “His son, Parker, is my friend. I know Mr. Dalton pretty well. He’s just got a good balance of having fun in class while still being serious.”

“Mr. Laine has always got time to help you know matter how busy he is, so I really appreciate him as well,” Dorman said.

Math and history are his favorite subjects, but he has also been enjoying his class on current world problems. He’s not yet sure what he wants to study in college, but he has been able to narrow it down a bit.

“It will probably be something to do with numbers,” Dorman said. “Business, statistics, economics, or money.”

“Those are usually higher paying jobs,” he laughed.

He will be attending Clark College in the fall.

“It’s a great community, everybody is so supportive. I thank God for being in my life, and without Him I don’t think I would be in this position,” Dorman said.

The teams he’s played for have gone to state twice for basketball, three times for football, and four times for baseball. He was also on the Knowledge Bowl team.

Dorman was the recipient of the Bob Chamberlain Award, which goes to a male senior who has displayed academic excellence, athletic achievement, and outstanding citizenship throughout high school. Staff and coaches vote on the award.

He received departmental honors in math and received recognition for his excellence in English and Leadership. He was a member of the Honor Society.

Dorman will receive approximately $4,000 in scholarships from the community. He plans to attend Clark College in Vanouver before transferring to a four year college.

He was offered $50,000 in merit scholarships from Northwest University. Laine is certain Dorman would have received more if he had applied to more schools.

Cole is the son of Chris and Alissa Dorman.

Jacob Eaton is the Salutatorian for Naselle High School’s Class of 2019. He was also the ASB president, and is graduating with a 3.971 GPA.

His favorite teacher retired a couple years ago.

“It would have to be Mr. Wise,” Eaton said. “He retired my sophomore year, but I had him eighth and ninth grade, as well as sophomore year. I only had math classes with him. I was a little ahead in math and so we were getting into his math classes. He was one of the strictest teachers as far as grading goes, but I kind of liked that. It prepared me for taking Running Start classes, which is what I’m doing right now. You didn’t really know what to expect some days. He did a great job teaching. I probably learned the most from him. He never gave anything to you easy.”

Eaton is glad he did the Running Start program but is quick to add, “I definitely enjoy being at school. I see high school as being able to make memories with my friends.”

He has enjoyed a variety of school subjects, especially math, history, and English.

Eaton will continue at Grays Harbor Community College in the fall. He plans to finish his Associates Degree next year while studying forestry. He may go on to finish a four year degree in the subject, either remaining at Grays Harbor, or transferring to Oregon State University or Washington State to complete his studies.

“I’d like to be able to come back somewhere around here, working for a timber company,” Eaton said. “I’m more interested in the logging operations and silviculture side of forestry. Road building might be fun too.”

Eaton played football and basketball all four years of high school. He was on the track team his senior year and traveled with the baseball team his junior year. He loves baseball, but an early injury kept him from playing.

“I work for people around the community on the weekend, and as much as I can in the summer,” Eaton said. “That’s all that I did last summer. I was mowing lawns and weed eating, and cutting wood, and haying. I got to a point where I was trying to find someone else I could refer people to, I couldn’t keep up.”

This summer he will work as a seasonal firefighter for the Department of Natural Resources.

Eaton will receive $9,000 in regional scholarships and $185,000 in merit scholarships from all the four-year colleges where he has applied. He was recognized for his membership in Honor Society and received departmental honors for science.

Jacob is the son of Lonnie and Kim Eaton. 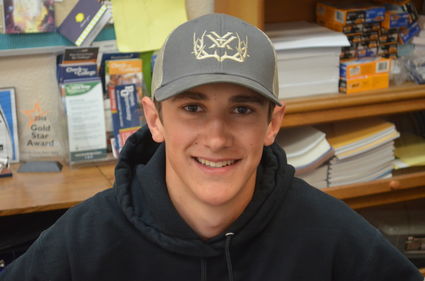