Responders unable to save sailor 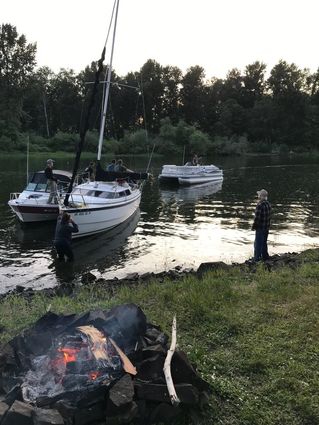 Local emergency services and bystanders worked for 45 minutes to try and save a man's life on Sunday evening at the Elochoman Slough Marina. Fishermen used their boat on the left to push the sailboat to shore after its captain collapsed. People visiting the marina responded as well, holding the sailboat, helping EMTs aboard, and bringing another boat around to transport the man to an ambulance waiting at the launch.

Harry Alan Utti, 72, of Seaside, Ore., died on Sunday evening despite the valiant efforts of two unknown fishermen, local emergency services, and other visitors to the Elochoman Slough Marina.

According to witnesses, Utti had been alone in his sailboat when it is believed that his engine failed near Cathlamet. Two fishermen appeared in a boat to give him assistance. In Elochoman Slough Marina security camera footage, Utti appears to get underway again a few hundred yards from the entrance to the marina. The other boat seems to take off but an instant later it comes back again, this time to push the sailboat to shore.

According to the Wahkiakum County Sheriff's Office, a call came in at 8:34 p.m., with a report that someone had collapsed and was not breathing. Dispatch began providing instructions on CPR.

One of the fishermen had jumped aboard and was administering CPR, according to a witness, Sue Zabel.

"They deserve a lot of credit," Zabel said.

Zabel's husband, David, helped EMTs board the sailboat, and her daughter, Misty Pellagali, held onto it while they worked.

Zabel's son-in-law, Joshua Pellagali, brought their party barge around, and EMTs were able to transfer Utti into the boat and bring him into the marina and the ambulance for transport to the helicopter waiting for him on Wahkiakum school grounds.

An unknown marina employee brought the sailboat into the marina and moored it.

Despite the heroic efforts from all involved, Utti was pronounced dead by the Lifeflight nurse at 9:19 p.m. His cause of death has not been officially determined as of this time.

"The bystanders here were great," Dan Bigelow, the coroner for Wahkiakum County said on Monday. "That was a community effort that started before first aid ever got there. A lot of people worked hard. I'm sorry they didn't have a better outcome. They deserved it for all the work they did."