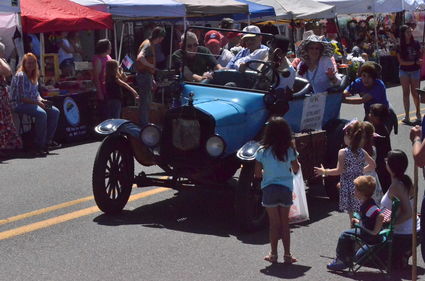 It was rockin' and reelin' in Cathlamet this weekend when a big crowd showed up to celebrate the 38th annual Bald Eagle Days, enjoy a parade, and shop at scores of vendor's tables.

The hometown event is a social one, and friends, former classmates, and families greeted each other happily on what turned out to be a warm, sunny Saturday.

"Everything went so great," Wahkiakum Chamber of Commerce Director Megan Elliott said on Tuesday. "I've been hearing such wonderful feedback from everyone. Most vendors seemed pretty darn happy and I think people were impressed with the amount of vendors. People seemed to really enjoy the All-American patriotic parade and that 'small town hospitality' community feel."

"People were very sweet and came up to us saying how great everything was, which makes all the hard work worth it," Elliott said. "We're closing everything up now, thinking, 'What's next?'"

The parade included Wahkiakum County patrol cars, a State Patrol car, and several fire engines and emergency service vehicles, and some of the many men and women who serve our community as law enforcement, volunteer firefighters, search and rescue, and more. The Wahkiakum VFW made a showing with a color guard and several members of their post.

They were met downtown with the National Anthem, sung by Wahkiakum alum Laurie Miller.

Grand Marshals Lee and Diane Tischer followed in a 1967 Cadillac DeVille. Parade emcee Bill Coons thanked the Tischers for their "servants heart and for encouraging others to serve in our community."

The Columbia River Corvettes paraded through town, followed by the American Legion Post III and the Wahkiakum County Amateur Radio Club, represented by Ron Wright on a bicycle with a portable amateur radio. Ba Lunatic the Clown made his way down the hill, making balloon animals. 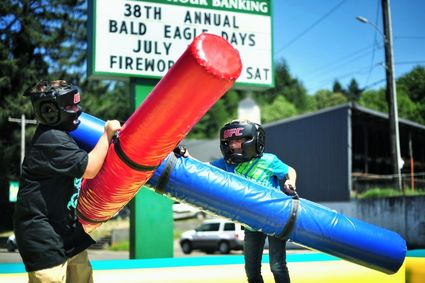 The Portland Yacht Club was festive as always, celebrating their 111th birthday.

"They love Cathlamet and we love them," Coons announced from his platform.

There were several antique cars, including a 1923 Model T driven by Bill Peterson, carrying the Cathlamet Woman's Club Citizen of the Year, Joyce Orr, and her husband Bob.

The Sons of Norway had an entry, as did the LCC Business Club, celebrating Longview Squirrel Fest. Santa waved at admirers from a fire engine, and even stepped down to give hugs to some of his biggest fans.

There were candidates for a few offices, Wahkiakum 4-H, goats, and the Wahkiakum County Democrats had a float. And finally, necessary for any parade in Wahkiakum was the log truck and a boat.