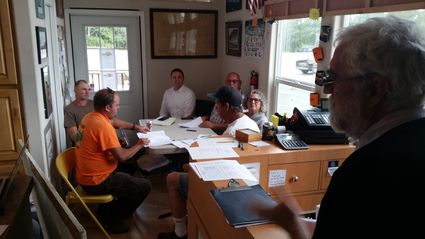 Community activists have begun surveying Wahkiakum County residents about their likes and dislikes for potential parks and recreation facilities.

Survey responses will go into development of a county parks and recreation plan. Ron Wright of the Wahkiakum Resource Action Plan (WRAP) workgroup said the effort arose after comments from the public at bi-partisan community meetings last winter.

Last week, the county board of commissioners agreed to contract with the Cowlitz/Wahkiakum Council of Governments (COG) to develop the plan, and Wright volunteered to spearhead the public survey, capitalizing on last week's county fair.

At the fair, volunteers passed out paper surveys and invited people to show support for projects they favored. This week, Wright visited meetings of local governmental bodies to discuss preliminary results.

The most popular projects were adding public restrooms and outdoor play facilities at Johnson Park, moving ahead with the waterfront park planned for Cathlamet, and developing nature trails and a retreat center in the Wahkiakum School District's Farm Forest.

Other popular projects include expanding facilities, including restrooms, at the SR 4 viewing station for the J.B. Hansen Wildlife Refuge between Cathlamet and Skamokawa, supporting a public laundry facility, and adding trails and recreational facilities outdoor sites such as Brookfield and Coffee Pot Island.

Ideas largely rejected include an electronic games pavalion and a paintball park.

Wright said Tuesday volunteers will continue to distribute surveys for the next few weeks, and is available online at https://www.surveymonkey.com/r/WahParkPlan.

The draft plan should be ready for action next January, which would be timely for the next round of grant applications.