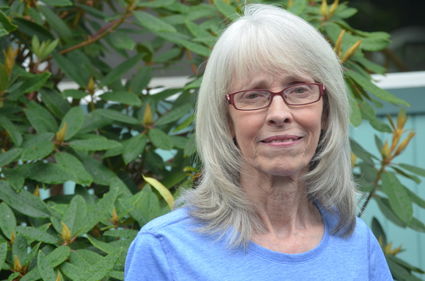 Carol Danker is considering how to enjoy retirement after working nearly 35 years in a local bank.

After 34 years, Carol Hattrick Danker will no longer walk through the door of the bank centrally located on Main Street in Cathlamet as an employee.

Though the location of her office never changed in those years, nor the business conducted there, ownership shifted four times during Danker's tenure.

She decided to retire when she realized customer's names weren't coming quite as easily as they used to.

Danker was born in Yakima and attended a two room school in a little town called Ford, north of Spokane. Her family ended up in Cathlamet when her dad got a job at the Beaver Creek fish hatchery. When dad wanted a promotion, they moved to Aberdeen for a couple years, but they eventually moved back to Cathlamet when the same position opened up at Beaver Creek, and Danker graduated from Wahkiakum High School in 1969.

She wasn't thinking about working in a bank in those days. She wanted to be a dental hygenist. She got a job as a nanny in the San Francisco area, and trained for her vocation during the day while the child was in school.

When she returned to Cathlamet, she asked the dentist if he needed any assistance.

She worked there for 15 years until someone approached her about working at the bank. She also knew her days as a dental hygenist were numbered, due to a hereditary condition.

When her parents came down to San Francisco 15 years earlier to attend her graduation from the vocational school, it was still winter. With a mountain pass in front of them, Danker's father pulled over to put the chains on the station wagon. Little would he know that as he worked, another vehicle would lose control and run into their car, causing it to roll over his arm. He didn't get it checked, they just continued on their way south.

What they didn't know then, but very much suspect now, is that he had what Danker is dealing with now, Ehler-Danlos syndrome.

Her father died rather suddenly when she was 23, after complaining of abdominal pain.

She was in Longview when it started. She went to her son's home and rested, thinking it would go away. It always had in the past. After a few hours of discomfort and vomiting, she went to the hospital and from there she went into surgery and had a section of her intestine removed.

"I expect I'll probably die from a perforation," she said.

The syndrome affects the connective tissue in her joints. Which may be why her dad, though very bruised after getting run over, didn't really seem to complain much about the injury.

"They called me Rubber Band in school," Danker said. "I could bend my fingers all the way back and I was good at doing back bends in tumbling."

She just never had much strength.

Danker stays busy with Kiwanis, and many years ago when her boys, Michael and Nicholas, were in school, she was active with the booster club.

They made wooden signs for Wahkiakum Mule fans that one might find in yards around the county once upon a time.

What now? Danker has a few ideas, but at the moment she's mostly keeping them to herself until she figures it all out. This much I can tell you, she's going to spend some time with her husband, Tony, her three grandchildren, and friends.