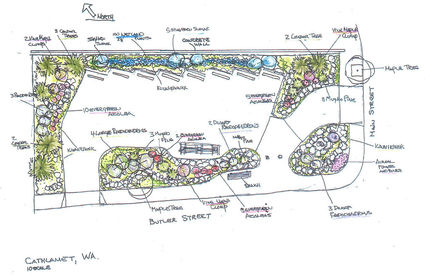 An updated draft design of a park on the Town of cathlamet's Butler Street property shows a mix of parking, planting and displays.

Member of the Cathlamet Town Council and the public got a look Monday evening at an updated proposal for development of the controversial vacant lot at the corner of Main and Butler streets.

In other business, council members approved of a nascent collaboration between the Chinook Nation and the council, county commission, Port District 1 and the Wahkiakum School District. Council members also approved a proposed change to the town planning commission; they established dates for meetings and workshops to draft their 2020 budgets, they tabled action on permits to allow a brewery to construct a waterfront establishment at the Elochoman Slough Marina, and they handled other agenda items.

Mayor Dale Jacobson presented an updated design concept for development of a park on the Butler Street lot. Jacobson said a friend of his mentioned the project to a member of the City of Vancouver's parks department who became interested and produced a scheme with eight parking spaces, interpretive display, decorative vegetation and so on.

The site would have a strip of asphalt three feet wide along the concrete wall, covering soil contaminated years ago by a leaking underground fuel tank.

"It seems to have a lot of trees, said Council Member Laurel Waller. "We were trying to avoid maintenance costs . . . "

"It looks to me like there's a lot of asphalt," said Jean Burnham. "Do you want more? We voted for trees [in workshops to gather input about development of the park]. I want a lot of trees."

"I'm excited by parking," said Lacy Vik of Wahkiakum Real Estate, "but why can't we park in there right now?"

Jacobson offered several reasons for keeping the lot closed to parking, including a lack of insurance for its use and lack of access meeting the Americans with Disabilities Act (ADA).

The council expressed support for suggested collaboration with the Chinook Tribe.

The tribal council was very supportive and welcomed the proposals to collaborate on projects that would honor Chinook heritage.

Possible projects include restoring signs for Queen Sally's Well, which is found on a vacant lot adjacent to

Council members welcomed the suggestions and authorized Olson and town staff to pursue a $7,500 grant to help finance the projects.

The council also supported Olson's suggestion to change requirements for membership on the town planning commission, which isn't functional.

This might allow the council to recruit interested persons to the board, he said. The council agreed, and Attorney Fred Johnson said he would draft an amendment to the municipal code to implement the change.

The council heard a request from Monroe Acres resident Jeff Rooklidge for a reduction to a high water bill caused by a leak.

Rooklidge said the leak occurred under the driveway between the meter and his house and wasn't observed until he received last Friday a $657 bill for August. Over the weekend, he and a plumber found and repaired the leak at a cost around $600.

Public Works Director Duncan Cruickshank pointed out that because the leak wasn't fixed until mid-month, the Roolidges will probably receive another bill for half the high amount.

Rooklidge said his normal water bill is $60-$70 per month.

The town's policy for water lost adjustments limits the reduction to $300.

The council agreed to delay a decision on an application by owners of the River Mile 38 brewery for permits to build a building and patio along the waterfront at the Elochoman Slough Marina.

Council Member Waller asked if the patio would be exclusive for the brewery, and the answer wasn't apparent from documents.

The council agreed to delay action to the October meeting and ask applicants to appear to explain the application in more depth.