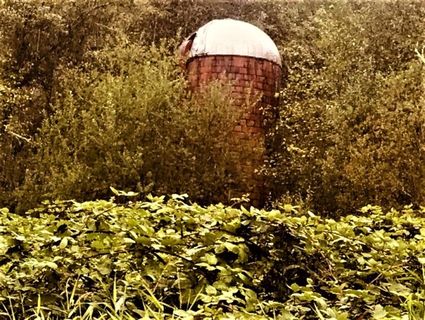 Silo on Hull Creek Road next to the abandoned Walker Cemetery.

Near the corner of State Route 4 West and North Hull Creek Road sits the oldest home in Grays River built around 1870 by Samuel Walker. The grass is close to four feet high in places, hiding this 150 year old home. It would be wonderful to see this home restored and put to use as a historical landmark. I find it comical and yet a bit sad that there is a heritage sign in front of the house that refers to the Meserve Park but says nothing about the older home next to the sign. Blackberry bushes surround what is left of this historical landmark, yet what most people do not know is that there was a Walker Cemetery near the vicinity of where the old Appelo's Shopping Center was located across the highway from Duffy's Irish Pub. It is this cemetery behind the fire station on the west side of North Hull Creek Road that led to the discovery of the Jesse Baker Jr. saga.

Thanks go to Bonnie LaDoe, a faithful reader of Downriver Dispatches from Portland: She informed me that her great-grandfather, William Kessell, homesteaded in Grays River in 1882 and was clerk of the Grays River School District #14, Pacific County, Washington Territory 1885. The records she shared indicate from the minutes from the school district from 1872 through about 1892 with three of the Walker children attending school. In November, 1872, the Walker children in school were as follows: William, age nine, Ella, age seven, and Harriet, age five. In July 1873, the school closed due to sickness of one of the pupils. In November, 1873, it was stated that Samuel Walker's child died of measles that summer. In 1874, the Walker children in school were as follows: William, age 11, Ella, age nine, and Samuel Charles, age five. While searching for the grave of Harriet Walker, which I did not find, I found out about the mysterious Walker Cemetery and the Baker family.

The records are not clear as to the exact location of the Walker Cemetery, but what is known is that there are at least 15 bodies buried there. The map coordinates give it as Grays River; that is all. Walker Cemetery was used by early Grays River area families during the late 1880's into the early 1900's. The records seemed to indicate that the cemetery was the Grays River Grange Cemetery, but after walking that cemetery, and looking at every grave, I did not find the Walker Cemetery names, I was confounded. I saw many of the early pioneer graves of the Appelos, Meserves, Axmakers, Barrs, Durrahs, Schmands, Badgers and others, but no Bakers. Someone must know where it is. Someone local who has lived here decades must know. I was asking everyone until I talked to Merlin Durrah, a life time resident of Grays River who knew the exact location. He also informed me that that same area was logged with the unmarked graves still there. Merlin said there was an abandoned house with a road leading to it. You can't see the house from the road, if it is still there. The area is so overgrown with trees, grass, and blackberry bushes. But with his directions, I was able to find the Walker Cemetery.

Erwin Holden gave this data to the Wahkiakum County Historical Society Museum before his death in November 1968: He had said that his father, John Holden, built many of the wooden coffins used for burials for most of those buried in the cemetery. This information was gathered from Wahkiakum County newspaper articles tracked down by Evelyn (Morris) Huerd.

The grave markers were more than likely made of cedar planks and dissolved into the earth over time. It is now known where those who are buried in the vicinity of the Walker home are Jesse Baker Jr.'s daughter, Clara Emeritt Baker, aged 11, his son, Frank Lincoln Baker, aged nine months, and his father, Jesse Baker Sr., aged 77. Some of the other names are Anton Klint (Hjalmar Klint's older brother) and two children, McCoone, McIntoshe and two children, Shroder, Sarah Tucker, Herman Hensel, Mrs. J.E. Jones and baby, Christian, and Dunie Walker. Is it possible that Dunie is a nickname Samuel Walker gave to his daughter Harriet before she died of measles and it is she who is buried there? Most cemeteries in the county were founded in the mid to late 1880's. Many who died before that time were interred on family land. Evidence of small family plots occurs on Fossil Creek Road as well as spots in Middle Valley in Skamokawa. The Baker family grew and moved on; however, Jesse Baker Jr. stayed in the area and is buried in Cathlamet. To be continued.

An open forum at Johnson Park cafeteria was held on Tuesday to discuss the future plans for Johnson Park. Attending the meeting were Bill Fashing and Matt Roth, representatives of the Cowlitz/Wahkiakum Council of Governments, who are development planners helping with Johnson Park's six year plan. There are so many needs at Johnson Park that one of the priorities set in motion was to replace the septic tank system, have one indoor bathroom handicap accessible, outdoor bathrooms instead of port-a-potties, a covered picnic area including a playground with modern playground equipment, and a combination soccer and baseball field, and walking trails. The biggest need for Johnson Park is volunteers. There are only three board members instead of five. These wonderful ladies are being overwhelmed. Come and join the board or volunteer your time to help develop and maintain this heritage site.

Another reminder that The Naselle/Grays River Valley Seniors luncheon is held on Wednesdays for those who are 55 and older; also the potluck will be at the Valley Bible Church on every fourth Wednesday. Volunteers are needed so please contact the Naselle/Grays River Valley Seniors' president Diane Hollenbeck at dianemarye@gmail.com or phone her at 1(360) 465-2991. Anyone interested in renting the Rosburg Hall is encouraged to contact Sonja Kruse at 465-2251 or Dee Nikkila at 465-2595. Thursday luncheon at noon at the Rosburg Hall is sponsored by the Community Action Program (CAP) out of Kelso/Longview. Any questions, contact Denise Rae at (360) 425-3430 extension 259.