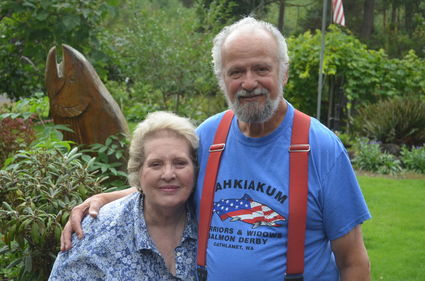 Sharon and Rich Casapulla shared stories about his father, fishing, and life in New Jersey.

Some of the ladies who watched me grow up in church won't be too pleased to read the story I'm about to share, so to them, I simply say, read the next few paragraphs with at least one eye closed. Two might be better. To others who are not so easily offended, read on.

Back in New Jersey, many, many years ago, Rich Casapulla's father, Thomas, played the trumpet. He played it well enough for the likes of Vaughn Monroe, and in those days, that was saying something. I'd never heard of Monroe, but my 81 year old father perked up at the name, and Rich compared him to contemporaries like Artie Shaw and Glenn Miller, whose names I did know.

But that wasn't all the time, and Thomas Casapulla was a member of a musician's union, as well as a band called the Dover Gutter Band. Their bandleader, Max Schroeder, kept time with a plunger.

The band had just finished a two day block party gig and were on their way home, when Schroeder asked Casapulla to pull over.

I need to throw up, he said. It probably came as no surprise to the band, as Schroeder had been enjoying himself immensely the last two days, refilling the head of his plunger with drink on a regular basis.

He did what he needed to do, alongside that road, and the band continued home.

The next day, Schroeder called Casapulla.

Do you remember where we pulled over yesterday? Schroeder asked.

Sure, I know exactly where, Casapulla told him. It was under a billboard.

We need to go back, Schroeder told him.

Schroeder had sobered up, it seems. And he discovered that he was missing his teeth.

So the pair made their way back to that spot on the road where Schroeder had earlier disgorged the contents of his belly, memorialized by a billboard.

He got out of the vehicle, walked over to the pile and fished out his teeth.

Heaven help me, readers. As Rich says, it gets worse.

According to Casapulla, Schroeder further insulted those teeth, rinsing them off with his own bodily fluids, and slipped them back into his mouth.

"My father was born in 1909," Rich Casapulla said. "He worked his way through college, playing his horn. He made a pretty good living at it. He worked a day job as an engineer, but then he worked in vaudeville and at night clubs. Before we kids were born, he played for Vaughn Monroe. He didn't go on the road with Vaughn Monroe, because my mother gave him a choice. Have a family or go on the road.

"He made the wrong choice," Rich laughed. "They had five kids."

But kids and an engineering job couldn't keep Casapulla senior from playing the horn.

"It was his only enjoyment," Rich said. "Not fishing or hunting or anything like that. He was in a union, Local 248 in Paterson, New Jersey. What they did, if someone was going to get married and wanted a live band, they would call him. He would ask if they wanted a two piece, three piece, four piece, whatever, and he would hire guys out of the hall. A lot of guys worked the same four piece band with the same four guys. Unless one had another job that night and then he would get someone else to come in. They played not only in night clubs, they marched in parades, and played in block dances and stuff like that."

One time Casapulla and his bandmates were playing at Atlantic City, on a steel pier off the boardwalk. During their break they were sitting under the pier, smoking a cigarette, unaware that they were sitting on a dead body.

Casapulla senior's connection to music brought him and sometimes his kids into contact with a few familiar names.

Playing in vaudeville shows meant that sometimes the kids got to come along. One time, Rich remembers seeing Bela Lugosi at the Rex Theater in Newark.

"He scared the heck out of me," Rich said. "I thought he was 10 feet tall. He said he wanted some blood and then all the lights went out."

"My father was playing in a nightclub one night and the mafia came in," Rich said. "They told them to put their singer on stage. Well, the nightclub had a gal that was singing. But the mafia insisted they put this guy on the stage. It was Frank Sinatra."

"He had the talent, but he had the backing of the mafia back then," Rich said. "I never met Sinatra, but I met Abbott and Costello. My dad used to play in a club with Lou Costello's brother, Pat. They used to ride together."

It's another road story. You won't have to cover your eyes this time, ladies who watched me grow up, but your hand might rise to your mouth, either in shock or to stifle a giggle.

Thomas Casapulla and Pat Costello were going through the Lincoln Tunnel one time, with Costello behind the wheel. A cop pulled them over and said they were speeding.

Costello handed the officer his driver's license and a ten dollar bill. When it was clear that the exchange was acceptable to the policeman, Costello took advantage.

"I've got your badge number and I'm going to turn you in for taking a bribe," he told the man. He drove off a minute later, no ticket and his ten dollar bill safely back in his wallet.

"There was a lot of graft back there," Rich said.

Thomas Casapulla was the fourth of five children born to Rich's grandparents in Paterson. As the only boy, he was practically carried around on a cushion, said Rich's wife, Sharon, laughing.

"He learned music," Sharon said. "A lot of people just listened to music and played by ear. But he learned how to read music and he taught it. When the opportunities for the big bands came along, he was able to do that too because of his knowledge."

Casapulla started out as a violin player, but after he broke a glass and cut a tendon in his left hand, he took up the trumpet.

"He was a darn good trumpet player," Rich said. "His first trumpet was gold plated with a lot of engraving on it. In later years he bought a better made trumpet. They are probably both worth a lot today."

Oh, those Casapulla stories. May they keep coming. Next time, a city boy discovers fishing, hunting and a beautiful girl, finds out there are unions and there are unions, and a country girl has culture shock and learns that sometimes TVs accidentally fall off the backs of trucks.