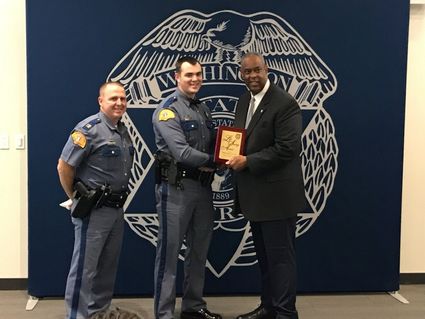 Jacobe Conrad of Cathlamet has been named 2019 State Trooper of the Year by the American Legion, Post 48 of Ilwaco. He also received a Life Saving Award from the Washington State Patrol in October for his good work during an event in September.

Conrad joined the Washington State Patrol in April of 2017. Since then, he has stopped 1,100 violators, investigated 28 collisions, and assisted 211 motorists. In the last year, he stopped 22 impaired drivers, three times the detachment average.

Washington State Patrol Sergeant Brad Moon praised Conrad for his investigative work, noting that he was trustworthy and that he welcomed his responsibilities.

At the Rod Run to the End of the World in Long Beach in September, Conrad was one of several officers to respond to an incident involving a suicidal man who had inflicted serious injuries to his neck. After officers were able to subdue the man, Conrad went to work.

"It was clear," Moon wrote in a letter of recommendation, "that Trooper Conrad had taken charge of the lifesaving efforts."

Conrad packed the man's wounds, garnering praise from the officers on scene, and an emergency doctor.

According to Moon, Conrad was also one of the first officers on scene following an accident on KM and the first to work with the Cathlamet youth who had been seriously injured. He later visited the boy in the hospital, bringing him candy and trooper hat.

"Trooper Conrad's humble and pleasant demeanor makes him easy to relate to and a pleasure to know," Moon wrote.

Conrad, 25, lives in Cathlamet with his wife, Gina, and two children. He graduated from a high school in Red Bluff, California. He joined the Air Force and served four years, in Afghanistan and in Qatar. He leads a weekly Awana group for youths in a faith based setting in his spare time, and participated in the 2018 Widows and Warriors Fishing Derby.

Why did he join the Washington State Patrol?

"The freedom to roam," Conrad said.