Solo sailor answers call from adventure to cross the Pacific 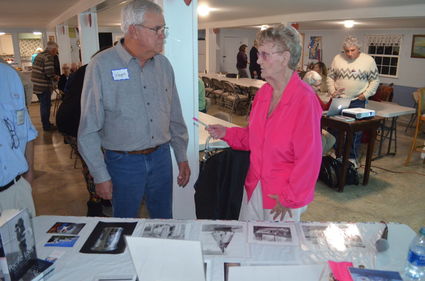 Sharon Sites Adams was the first woman to solo sail the Pacific Ocean. She shared some of her adventures with the Cathlamet Yacht Club at their Fall Dinner Meeting on Saturday.

Sometimes I just get lucky. From the moment I saw that the first woman to sail solo across the Pacific Ocean would be speaking at the Cathlamet Yacht Club's Fall Dinner, I'd been daydreaming ways to finesse an invitation.

I never verbalized the wish, but somehow, someone got the message, and I got that invitation.

I'm glad. I like stories, and Sharon Sites Adams had a fine one to tell.

Adams, who grew up in Prineville, was an adult the first time she saw the ocean.

"I wasn't impressed," she told the yacht club.

Her early life in central Oregon and her ambivalence to the wide water hardly foreshadowed what would come, but she is proof that all manner of adventures await those with a whisper of "yes" inside them.

In 1964, she found herself a widow managing a dental clinic. She heard patients talking about Marina del Rey, and one day she decided to check it out for herself.

Something about the movement of the sailboats caught her fancy. She picked up a flyer for sailing lessons, made a phone call, and discovered she could learn to sail for $50.

"I had four one hour private sessions on a 21 foot day sailer, I had four evening group sessions learning terminology and the rules of the road. And I was a sailor," Adams said dryly.

A couple months later she was sitting on her first boat, addressing Christmas cards, when a notion came over her to sail to Hawaii.

"I hadn't been outside the breakwater yet," Adams told her listeners, who roared with laughter.

Eight months later, she cleared the breakwater and sailed to Hawaii in a 10 year old all wooden Danish Folkboat.

"I learned a lot. A lot about sailing. I learned some about myself," she said. "I have not gone around advising other people to do it. You do what is up to you to do and I simply couldn't see what there was about it that I couldn't do. I didn't know a woman hadn't done it."

"People say 'Why Hawaii?'" she added. "It was the first thing out there."

She was to notify family, who traveled to Hawaii in anticipation of her arrival, with the firing of a Very pistol. Growing up in Prineville, she knew how to use a rifle, and hadn't bothered to test the Very pistol. It broke her wrist and failed to launch properly.

So she sailed around the island and fired the pistol again, this time with her left hand, when she saw a commercial fisherman the next morning.

"Did you want something?" he asked. "We just wanted to do a little fishing. We didn't expect to find you."

She'd arrived. After catching up with family, she shipped the boat home, and visited the islands for three weeks.

A few years later, she convinced a friend to build her a boat. In 1969, she traveled to Japan, where the boat was built, and she sailed it to San Diego, alone.

Her third morning out was foggy and "an apparition," a square rigger belonging to Japan, drifted out of the mist under full sail.

She'd gone through her third gale by the 17th day, when exhausted, she got out of her wet gear and crawled naked into her sleeping bag.

"I heard the loudest whistle blast I shall ever hear," she said.

Tears streaming down her face, she struggled to put her clothes on.

"I was just coming through the third gale," she said. "I am hanging on with one hand and I defy anyone to put on sweatpants with one hand if one side is inside out."

Adams addressed problems as they arose, fixing this and that as needed. She listened to the radio, sewed a dress, read books, did crosswords, and made friends with birds to pass the time. She even made a cake on her 39th birthday, spent at sea.

Some 70 days after leaving Yokohoma, Japan, she arrived in San Diego to much fanfare.

In Adam's 89 years, she has visited 71 islands in the South Pacific, sailed around Cape Horn, lived in Australia, and more.

"All because my car didn't turn left and go home on a Sunday afternoon," she said, remembering the first time she saw Marina del Rey.

To read more about Adam's adventures, look for her book, Pacific Lady: The First Woman to Sail Solo across the World's Largest Ocean.