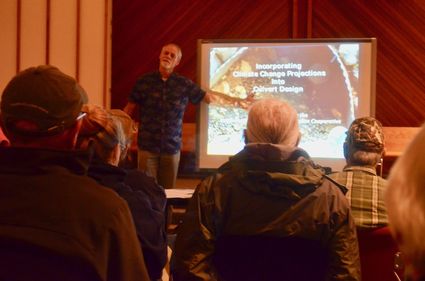 Washington State Climatologist Nicholas Bond spoke toa small crowd about the complexities of climate change and how it might affect our ecosystems and the salmon that has been so important to the people of the Northwest at the Wahkiakum Outdoors event at the Hope Center on Nov. 12.

"2014 brought record returning numbers of Chinooks coming through Bonneville Dam," Bond said. "We ended up having a drought in Washington State in 2015. It wasn't a lack of precipitation, it was so warm that it was raining rather than snowing in the highest elevations in the mountains."

Though a record number of salmon made it to Bonneville Dam, hardly any of them got to McNary Dam.

"The water was so warm because there was so little snowmelt," Bond said. "They succumbed to disease. There was a huge die off of sturgeon that year as well. There was some evidence that they were eating themselves to death on the carcasses of sockeye salmon."

There were really big wildfires in the Northwest in 2014 and 2015, Bond noted, as well as really warm oceans and harmful algal blooms.

"With climate change, water and air temperatures are going up," he said. "With sea level rise, maybe estuaries that are key habitat at certain stages of life cycles get flooded, different mix of bugs there. The chemistry of the oceans are changing the potential for invasive species in marine communities, and what is going to be happening to the freshwater habitat for fish. There is a lot there that could be happening."

"It was very consistently warmer than it was decades ago," Bond said. "It's still a great place to be, but we're seeing changes."

He spoke about snow pack, noting a downward trend.

"That means that floods are getting to be more intense than they used to be on a lot of rivers," he said. "If it's coming down as more rain than snow, when it really comes down big time, it's a bigger flood."

But, he admitted, they don't absolutely know.

Finally, he spoke about actions being taken around the state to help salmon, including volunteers improving habitat on a river on the Olympic Peninsula, an irrigation district working with the Department of Ecology in central Washington to send water to the top of a stream to benefit habitat, and the removal of a dam on the Elwha River.

"There are already fish returning to spawn," Bond said. "The nutrients that are going upstream with the fish are really key to the forest as a whole. It's a real success story."

"Ecosystem health is connected to human well being," he said. "I'm interested in the boots on the ground efforts to improve the freshwater habitat. That is something we can do something about."

Bond acknowledged that it was a political issue for some but felt there was some hope.

"It is my feeling that there is a kind of environmental stewardship that is becoming more a part of the faiths of western and eastern religions and the idea that we want to give a good legacy behind," he said. "I think it's encouraging that there are these kind of movements for environmental protection."