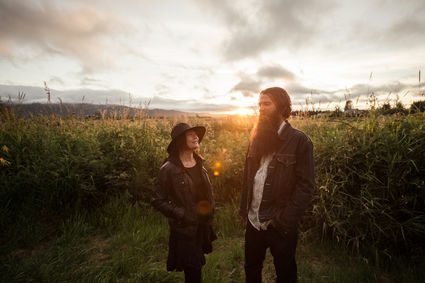 There are only a couple days left to get in on a Kickstarter project started by a band that calls Cathlamet home for a few seasons between cross country tours to promote their music. You may have caught the couple's act at River Mile 38 Brewery or at the Skamokawa Grange. They are The Mutineers, or Merry Young and Brian Matushek, "a traveling duo and a husband-and-wife team who have been making music and art together since 2008."

Last summer, they also performed for the Road Scholar Program through Columbia River Kayaking with Andrew Emlen and Kyleen Austin.

The pair have had a lot of requests for a vinyl album at their shows. It costs a lot more to produce than a CD. Thus the Kickstarter campaign. They are almost there, but the deadline is coming fast, February 24.

The new album, which is expected to come out in June will have many songs inspired by their time living on the lower Columbia River, Matushek said.

Links to their webpage, where you can hear their music and for the Kickstarter project can be found below.