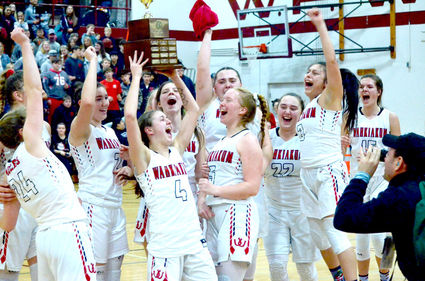 The Wahkiakum Mules girls basketball team, or the hardest working team in the west, beat Mossyrock 51-30 on Saturday to take the District IV 2B championship title.

"I thought it was a great defensive performance from the whole team," Coach Rob Garrett said. "The goal was to out work Mossyrock one possession at a time and I think we consistently did just that. It was great to see the girls come out and execute the game plan so well. I don't think a lot of people gave this group a shot to go back to back on district titles after losing five seniors last year. That was definitely a big goal of ours this year and it has been nice to see just how far these girls have come.

"Collectively, they put in a ton of time and that's why they have been able to get this far this season. I love the way we are playing right now. The defense looks awesome and now we are gaining some confidence on the offensive end. Good things will continue to happen for this group if they keep working together like they have so far."

This Saturday, the Lady Mules will face Adna in a regional game at Mark Morris at 6 p.m. Win or lose, they are headed to Spokane for the State Class 2B tournament March 4-7.

"We are excited for the next chapter of the season," Coach Garrett said.