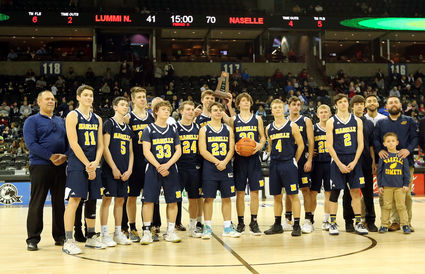 The Naselle Comets celebrate third place at the State 1B tournament in Spokane on Saturday.

They started the tournament on Thursday with a 57-50 win against Muckleshoot Tribal School in overtime.

Naselle lost in the semifinals on Friday to the eventual winner of the 1B tournament, Odessa, 62-56.

On Saturday, the Comets defeated Lummi Nation 70-41 for third place.