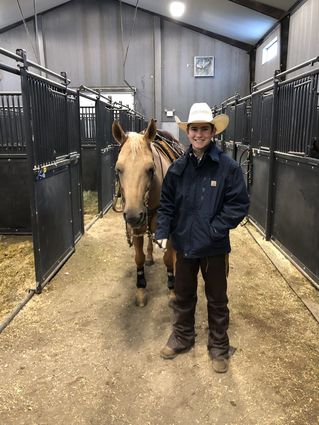 Luce, the son of Cara Elliott and Casey Luce, has been riding horses for five or six years. He started showing at Wahkiakum County Fair. He has been competing for about a year, but this was his first world show.

In reining cow horse, the horse and rider are judged on their performance of several maneuvers involving a live cow.

His step-mother, Andrea Luce, introduced him into the sport, and he began working with a trainer, Jim Spence in Yamhill, Ore.

"I learned so much from him," Luce said, "and am now learning even more from my current trainer, Trent Pederson in Brush Prairie."

Normally, Luce meets with Pederson four days of the week for two to three hours to practice and learn new skills. With classes suspended at this time due to the covid-19 health emergency, he has been sticking closer to home, taking care of the family's animals and riding six days a week.

"Balancing school and training every day is usually not hard," Luce said, "but while I'm gone away from school at a show, making up work can get a little tricky sometimes."

"I have learned that I can be a part of something bigger," Luce said. "I can go and meet new people from around the country and world, I will be forever grateful for that. I'm having the time of my life."

What makes it even better for Luce? Family coming to his shows, wherever they may be: California, Texas, Nevada, Idaho, Oklahoma, or anywhere else he has been competing. With a sixth place showing in world competition at the age of 15, there's no telling how far Luce will go.