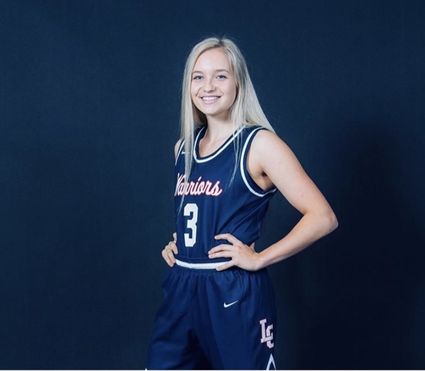 Two days before the Lewis-Clark State College Warriors women's basketball team was headed to the NAIA Division 1 National Championship Tournament, the event was canceled due to concerns about covid-19.

The decision ended the season early for LCSC, including Wahkiakum's own Peyton Souvenir, now a junior guard for the Warriors.

"It will always feel like an unfinished season, but not an unsuccessful one," Souvenir said. "I can't wait to get back on the court with my team next year."

Souvenir played in all 31 games this year, averaging 25 minutes per game, and contributing to the score in every game. She scored 223 points this season, averaging 7.2 points per game. She shot 78 for 209 in two point range, and 25 for 96 from three point range. More impressively, she shot 42 for 51 from the free throw line for 82 percent. She had 21 offensive rebounds and 61 defensive rebounds this season, as well as 122 assists, 66 steals, and six blocks.

She scored 17 points in LCSC 89-83 loss to Whitworth University in December.

LCSC finished the season with a 21-10 record.

Souvenir was named to the All Tournament Team in November during the Twin Rivers PT Classic. She was also named to the All Conference Academic Team for the second year in a row. She is the daughter of Kristen and Todd Souvenir of Cathlamet.

"It's been fun to watch and get to know this group of girls over the past few years," Kristen said. "Six of the 12 girls on the team are juniors like Peyton, so we've formed close relationships with those families. The team worked very hard all year, their main goal was to qualify for the national championship tournament which they did two weeks ago, but it was unfortunately canceled at the last minute. Overall it was a fun, successful year for the team.

"Next year, LCSC will be switching to the Cascade Collegiate Conference. The CCC schools are mostly in Western Washington and Oregon so Peyton will now have several games close to home for her senior season."