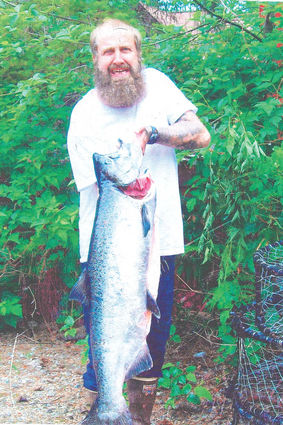 Dan was an amazing artist. He loved sharing his artwork with family and friends. Daniel and family moved to Ocean Park when he was nine years old. He spent all but the last 20 years on the Peninsula.

In 2000, Dan moved to Ketchikan, Alaska. He at that time began to live his dream of fishing and hunting every day. His love for the outdoors was apparent to everyone around him.

Dan leaves behind numerous friends that love and adored him during his time in Alaska.

But truly the greatest treasure Dan ever found was being saved on Easter Sunday by our Lord Jesus Christ.

In addition to his mother, Dan leaves behind eight siblings: Rick Jones of Ocean Park, Wash., Terri Hunt of Cathlamet, Wash., Cindy Delmazzo or Astoria, Oregon, Mary Henkes of Bulb Gap, Tennessee, Bill Freuler of Kelso, Wash., Linda Jordan of Cathlamet, Wash., Jerry Jones of Longview, Wash., and June Preston of Naselle, Wash. He also leaves behind a daughter, Carolann Freuler of Ketchikan, Alaska. He was preceded in death by his father, Fred L. Freuler and a sister, Debbie Thatcher.

A celebration of life will be held on Aug. 1. If interested in joining us please contact Peggy Fuller at 360-751-9936 or email lindrb2011@hotmail.com.

This is a story about Digger Dan,

Who finally found his home in Ketchikan.

The natives welcomed him to their land,

Out in the woods they would take him,

Told him it would either kill him or make him.

He was so happy to hunt and fish,

The truth came from a man's one wish.

All day long he could whittle and draw,

All the amazing things that he saw.

All the memories that he shared,

About the people he met that really cared.

He never felt judged when he walked along;

In Ketchikan his final home.

When all the tourists would look and stare.

He would look back and give them a grin,

And tell 'em a story of places he's been.

He told them about eagles and deer that he'd hunt,

Watching the wolves while he smoked a blunt.

He loved it when producers came to see,

Digger Dan in search of history.

What kind of treasures that he found

When digging old dumps all around.

From bottles to jars and rings and things

From dolls to glass balls and jewels with bling.

So much about him

That was part of the life

Of the man, Digger Dan.

When we all get together

I'm sure he'll be pissed,

Because of the great party

For him, that he missed.