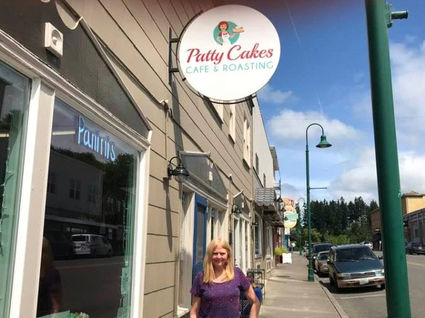 The Covid19 virus has curtailed many people from traveling through the county. Since Phase II has begun, the governor has lifted the restrictions on restaurants in the state. Those that have reopened are using only 50 percent seating capacity in order to comply with the governor's suggested guidelines for social distancing. They are also in compliance with the Atlanta based Center for Disease Control's (CDC) suggested guidelines for social distancing. This is important not only for the local residents, but also for those traveling and looking for a place to sit and eat in a restaurant without having to eat in their car. Rick Nelson, the publisher and editor of The Wahkiakum County Eagle is giving back to the community and is proud to announce that the following restaurants are in compliance and open for business, ready to serve the public.

Patty Vezaldenos has operated Patty Cakes for the last two years. She roasts her own coffee beans from five different countries which are fair trade beans. She serves artisan style foods for breakfast and lunch. Her food is locally grown and made from scratch. Coffee, fruit smoothies, as well as Italian sodas are available. Patty Cakes is open Monday through Saturday from 8 a.m. until 2 p.m. and Sundays 9 a.m. until 2 p.m. For call-in orders or questions you may contact her at 369-795-0078. Their website is http://www.pattycakes.cafe. They are located at 98 Main Street in Cathlamet.

This Mexican and American restaurant has been operating in Cathlamet for the last six years. Chef Valente has been honing his culinary skills for more than four decades. Breakfast is served daily until 11 a.m. When they were open only for take-out, they used the time to paint and remodel the restaurant with a new look. They are located at 88 Main Street in Cathlamet. Their business hours are Sunday and Monday from 7 a.m. until 2 p.m. Tuesday through Saturday they are open from 7 a.m. until 8 p.m. For call-in orders or questions contact Maria's at 360-795-3032.

For the last eight years Logan Britt has operated the Duck Inn. This establishment has been at the same location since the early 1950s. He was closed from the beginning of the pandemic and used this time to remodel the restaurant. He reupholstered many of his booths and moved them to comply with the suggested social distancing requirements. Outdoor seating is also available on a newly stained deck. The Duck Inn has been repainted and they will have a new menu. They are located at 1391 State Route 4 in Skamakowa. For call-in orders, questions, and hours, call 360-795-6055.

The Rosburg store has been a local icon since it was built in 1951 by Mable and Leoni Olsen. The original store was next to the Rosburg Community Hall on the Grays River.

Ed and Roni Miller along with Ed's brother Landen bought the Rosburg store almost two years ago. Ed and Landen's father grew up in Cathlamet. The two brothers often hunted in the county and would drive by the Rosburg store. They saw it was for sale and began to consider the store as a family investment. Landen graduated with a culinary degree from The Art Institute of Seattle. This local icon serves breakfast all day, starting at 12 noon, when they're open. They are located at 4193 State Route 4 West in Rosburg. Their hours open are Monday through Saturday from 7 a.m. until 7 p.m. and Sundays from 9 a.m. until 7 p.m. For call-in orders or questions contact the Rosburg Store at 1-360-465-2223. 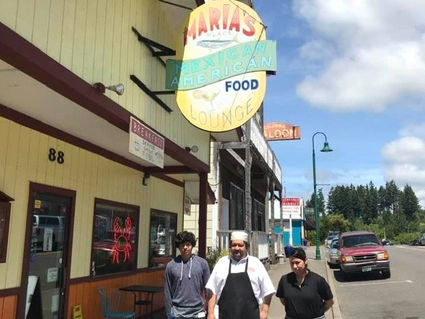 By all appearances, Johnson's One Stop looks like an ordinary Shell gas station and convenience store, but that is where it ends. This is a small grocery and convenience store. Although this business has seen a 25% loss in revenue due to the Covid19 outbreak with less tourism, they have not laid off any employees. Earl Johnson, the manager of the business, is a fifth generation Johnson in the community. In the early 1950's this location was a car dealership. In the early 1960's it was converted into a gas station with two auto repair bays. Now the bays are part of a restaurant. Earl's father, Clayton, bought the establishment in the early 1980's. About 14 years ago, they started serving food. They now serve Mexican food, Asian food, pizza, wraps, sandwiches, and your typical snack foods. Anyone who likes to hunt or fish can get licenses and bait. They are open seven days a week from 5 a.m. until 10 p.m. They are located at 823 State Route 4 West in Naselle. For more information, you can contact them at 360-484-3455.