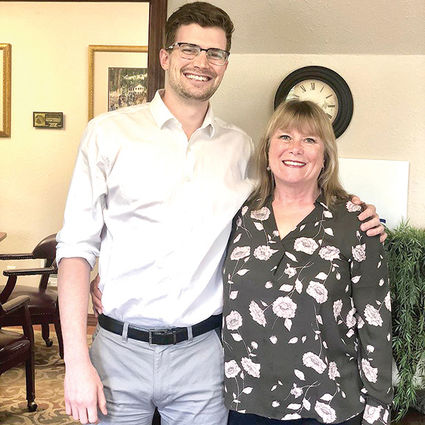 James Sorenson has taken over at Farmers Insurance in Cathlamet, after Linda Barth, right, retired at the end of June.

Sorensen is from Vancouver but is making his home in Cathlamet.

He has been working for Farmers Insurance for the past two years, in their protegé program.

"The goal for that entire process is to do the things that an agent does during that term," Sorensen said. "The first year I was a producer, and then the second year I was in the protegé program. You serve your own clients, and you have a requirement to hit a certain number of new business premiums, and as you hit those goals, you can reach a level where you have the option to start your own agency."

"I really got lucky," Sorensen added. "My district manager said there was an opportunity coming up in Cathlamet, and the first thing I said was, 'Where is Cathlamet?'"

Small towns and the insurance business aren't new to Sorensen. His parents were in the business, setting up shop in Jacksonville, Ore., when Sorensen was young.

"It's important to stay local, and everyone kind of supports everyone, which is what I want to do," he said.

Sorensen studied business with a focus on human resources at Washington State University and returned to the Vancouver area where he worked as a bartender. After watching an older co-worker struggle, Sorensen realized that he wanted a more secure future, and that he really wanted to own his own business.

"The opportunity just kind of fell into my lap, and for me, it's an amazing start to obtain already existing policies, and my main goal is to see the existing clients that I have," he said. "I want to set up meetings with everybody as I get settled in and have a review, and see if I can't save them a bit of money."

He likes providing peace of mind, making sure people are properly insured.

"It's a part of financial advising, covering people's assets. I spend a lot of time explaining to people what they are paying for," Sorensen said. "I know everything about it, but most people don't understand what insurance is or what it does, they just know they have to have it.

The office is still at 325 E State Route 4, but in November, Sorensen will move into a space on Main Street in Cathlamet. For more information, Sorensen can be reached at 360-795-3276.