Anglers optimistic, but the fishing is slow 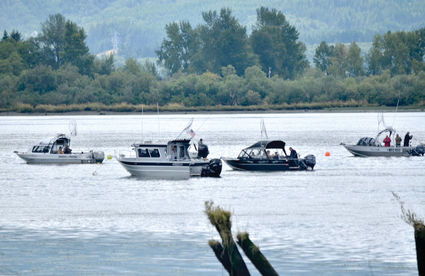 Anglers try their luck and skill off Cathlamet, hoping to hook a salmon.

The August fishing season has brought a lot of fishermen to the Elochoman Slough Marina in Cathlamet, but so far, it sounds like an exercise in frustration for a lot of the anglers.

"The fishing hasn't been very good this year," Tom Wilson of Tumwater said. He has been coming down to Cathlamet for 21 years, and this is the poorest fishing he says he's ever seen.

The fish might be late this year, one says, or maybe they are somehow bypassing Cathlamet, the other speculates.

Ultimately, Wilson isn't interested in fish behavior, he just wants to catch them.

Some lucky fishermen are reeling in the rare fish. It's not his usual good fortune, but Wilson admits he has caught three in the last three weeks, and Port 1 Maintenance Manager Todd Souvenir recently caught a 24 pound adult chinook.

"The fishing hasn't been the best, but it has definitely not been a lack of effort," Souvenir said. "Everybody is continuing to try, but for the amount of poles in the water, the amount of fish being caught, it's been pretty minimal."

"This next week would normally be the best," he said. "In the past we were able to fish the fall fishery in the first week of September, which is usually one of the better weeks, but as of right now, it closes on August 31."

Still, they keep showing up, these men and women with their boats and fishing poles.

"You can't catch one if you don't have a line in the water," Souvenir said.

Despite the pandemic, it's been a great month for Port 1 and the Elochoman Slough Marina as far as launches and camping. As of this Monday, they've made more money this month than they did in all of August, last year.

"I think everybody is looking for something to do," Souvenir said. "It's not just the fishing piece. Right now we're turning quite a few campers away. They are calling at the last minute because they think they can make a reservation. They are surprised because they can't."

The marina has not been able to accommodate everyone, because they are trying to consider safety during the pandemic, and have been ensuring that there is always an empty campsite between groups.

Also, they've not only been honoring long standing reservations from returning campers, but are seeing an influx of new people discovering their lovely spot on the Columbia River, which could be good news for Augusts to come.