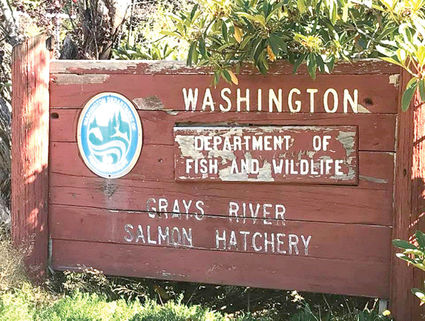 What is happening with the SR4 Slide?

Celeste Dimichina, the communications consultant for The Washington State Department of Transportation (WSDOT), has informed me of an update on the State Route 4 Emergency Stabilization Project. As of Aug. 20, this project was awarded to Granite Construction Company. Typically, once a project has been awarded, it can take up to 45 days before construction can begin. This would mean construction on this project will begin sometime between late September and early October. Once WSDOT has a definitive date, they will share this information with the public.

As many of you remember on Jan. 23 of this year about nine miles west of Cathlamet on State Route 4, a massive landslide closed the highway in both directions. A single lane east of the KM Mountain is still open and traffic will alternate through the area via the eastbound lane. The westbound lane will remain closed until the hillside is stabilized and free of debris. On Jan. 27, WSDOT awarded an emergency repair contract to Nutter Corporation and cleanup work began Jan. 29. Crews worked with extreme caution and closely monitored the hillside in order to remove the approximately 50,000 cubic yards of debris. A temporary barrier is in place to separate traffic from the hillside, which creates a safe workplace for crews while also protecting drivers. Travelers on both directions of the highway will alternate through a single lane around the clock with a temporary traffic signal until the project is complete. For safety, the speed limit through the area is reduced to 25 mph. The total cost is estimated at $3,289,000.

Washington State Department of Fish and Wildlife (WDFW) hatchery on Shannon Road in Grays River is not open at this time due to the Covid19 outbreak. Part of Shannon Road is only one lane due to a recent landslide, so drive cautiously. The Grays River Hatchery opened in 1960. It has been more than a century that WDFW hatcheries have produced fish for harvest. These hatcheries have presented the basis for Washington's very popular recreational fisheries and the many jobs that depend on them.

Recently the hatcheries have taken on an additional new role. They are becoming an essential tool in the conservation of native salmon stocks. In 1977 before any fish species was listed under the Endangered Species Act, a WDFW hatchery was being used to avoid extinction of the spring chinook stock. Today nearly a third of the state's hatcheries are used in some capacity for wild stock conservation work. The main species affected are hatchery coho, fall chinook, and hatchery steelhead. The location is on the West Fork Grays River from posted markers approximately 300 yards downstream of the hatchery road bridge upstream to the water intake/footbridge. The fishery also will help remove hatchery-origin fish, allowing a greater proportion of wild fish onto the spawning grounds. The daily limit is six salmon with a minimum size of 12 inches. Up to two may be adult chinook. All chinooks must be adipose and/or ventral fin clipped to be retained. Release wild coho, chinook not adipose and/or ventral fin clipped, and all chums. In addition two hatchery steelhead may be retained. Release wild steelhead and all other game fish. Night closure, anti-snagging rule, and stationary gear rules will remain in effect to maintain an orderly fishery. The main stem Grays from the SR 4 Bridge upstream to the South Fork and the West Fork from the mouth to the boundary markers below the hatchery road bridge will remain closed to protect naturally spawning chum salmon.

Just another reminder that although there are no longer senior lunches at the Rosburg Hall, the Lower Columbia Community Action Program, better known as CAP, has begun delivering take out lunches to Rosburg Hall for pickup on Thursdays between noon and about 12:15 p.m. If you have participated in the CAP luncheons in the past there is nothing you need to do but call Diane Hollenbeck at 360-465-2991 to place a lunch request. Anyone new to the program will need to fill out a short form for CAP. This September's lunch menu for seniors: Today (Thursday), chicken strips, Oregon beans, potato salad, sliced oranges, tapioca pudding; Sept.10, baked chicken, roasted potatoes, spinach salad, sliced peaches; Sept. 17, tortellini bake, Caesar salad, Italian vegetables; Sept. 24, apricot chicken, brown rice, marinated vegetable salad. Anyone who wishes to receive a lunch for all or any given week, please contact Diane Hollenbeck at 360-465-2991. If you would like a lunch but cannot come to Rosburg Hall for pickup Diane will deliver your lunch to you. Contact Hollenbeck for information regarding the CAP lunch program.