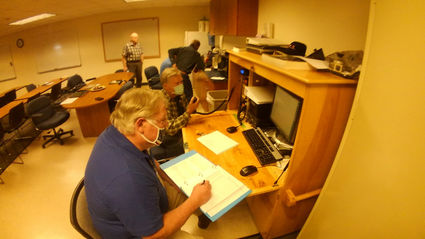 How well could we talk to each other during an emergency if all of the cell phone towers were down, land-lines were broken, no internet, and no power? That was the question the Wahkiakum County Amateur Radio Club set out to answer last Saturday October 3. In that scenario, we would expect most people would go to one of our county's seven fire halls or to one of the other gathering locations (Johnson Park or Wahkiakum High School), or to a high ground location in the Altoona area. We thus placed a "ham" (aka licensed amateur radio operator, trained to facilitate emergency communication) at each of these 10 locations plus we staffed the county Emergency Operations Center (EOC) in Cathlamet.

And the answer to our question? In short, very well. All locations could talk directly with the EOC except the Grays River Fire Hall, which had a temporary set-up. Grays River spoke with the EOC via one relay, the station at the Raistakka Road fire hall. With a permanent antenna Grays River should also be able to connect directly with the EOC. Also, nearly every location was able to talk directly with every other location. For the details, visit us during one of our club meetings, the second Tuesday evening of every month, 5:30 p.m., at the EOC (River Street Meeting Room, Cathlamet). Also, if this sounds like something you would like to get involved with, come to one of our meetings.

The second question, of course, is: Now that we know that we have a very good "worst case" local communications system within the county, how do we communicate outside of the county? That question we have already answered as reported in The Eagle in previous years: At our annual Field Day in June local hams "talk" with other hams all over the country, exactly to practice getting messages out of a stricken area. We have no trouble talking with folks from 40 miles away to 5,000 miles away, and further.

How would this all work? As an example, let's say you want to tell your aunt in Iowa that you are OK. You go to your local fire hall or one of the other locations, fill out a simple message form with your aunt's contact info, and give it to the ham operator. S/he radio's it to the EOC ham operator, who forwards it to one of our local ham stations set up for long-distance communications. If your message includes an email address, it is then put into "Winlink" format and placed into the Amateur Radio long haul radio digital network, where it is transmitted to a ham receiving station outside of the affected area, who then places it onto the internet. If your message has only a phone number to call your aunt, then it is usually sent via "single sideband" to an operator in the area closest to where your aunt lives, who places a call to your aunt with your message. Either way, your aunt can reply, which travels in reverse back to you. Hams have been practicing, and using various versions of this communication system during real emergencies, for nearly a hundred years. It works. We are ready to serve the people of Wahkiakum county.