November 23 – 12:21 a.m. A Cathlamet resident reported that she was receiving threats from her ex-boyfriend’s wife. 1:11 p.m. A caller reported that someone was skinning a deer along SR 4 near the water treatment plant. 1:23 p.m. A caller at Vista Park reported hearing shots fired from a northwesterly direction. 2:15 p.m. Adult Protective Services requested assistance from the sheriff’s department during a visit to an Elochoman Valley home. 4:41 p.m. A caller reported that a woman was behaving strangely at the brewery, hiding behind signs, dragging a purse across the road, and sitting in a car. 6:04 p.m. An agency in Cowlitz County asked the sheriff’s department to be on the lookout for an elderly woman with early onset dementia who had left her home in Longview around 1 p.m. She was found at a Rosedale business. Her family was notified, and they came to get her. 7:27 p.m. A caller was concerned about a possibly suicidal Rosedale resident. She had given her dog away and was not answering her phones. A deputy responded, and a mental health professional was on standby. The individual told the deputy she was not suicidal, that she just had a lot going on and would get some help if needed.

November 24 – 7:52 a.m. A caller at a West Birnie Slough address requested assistance after getting locked out of a vehicle while its engine was running. 9:36 a.m. A burglar alarm was activated at a Rosedale address. A deputy spoke with an individual at the scene who claimed to be an employee before contacting the owner, who said the man was allowed to be there. The shop door had been opened before the alarm could be disabled. No law enforcement action was taken at that time. 12:11 p.m. The Cathlamet ambulance aided an ailing Puget Island resident. 12:58 p.m. The Grays River ambulance aided a Grays River resident with high blood pressure. 1:47 p.m. A Puget Island resident reported that a family member was harassing her. 2:22 p.m. The Cathlamet ambulance aided a Rosedale resident complaining of chest pain. 2:40 p.m. A caller requested a welfare check on a woman who had been dropped off at County Line Park. 11:13 p.m. A caller reported that there were people drinking, listening to loud music, and laughing at a bar on Main Street in Cathlamet. A deputy responded and the people agreed to turn the music down. The caller called again later and said that it was quieter, but someone who was on parole and not supposed to be drinking had gone out the back of the building and was talking loudly. 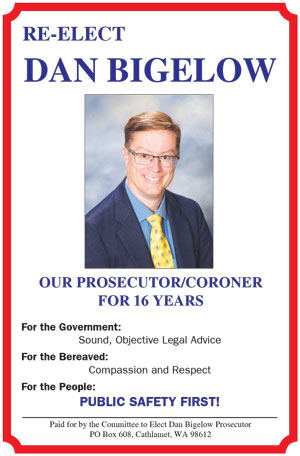 November 25 – 2:25 a.m. A caller reported that a person with a cane appeared to be confused, and was standing in the westbound lane of SR 4 in the Rosedale area. A deputy arrived and initially found the subject to be coherent and alert, but when he offered to take her home, she did not know her address, or the date and time. The Cathlamet ambulance responded. A responsible party was notified. He said he knew of the subject’s condition and did not want her to be seen by a doctor. He said he would meet the ambulance at the hospital. 8:47 a.m. A caller asked to have a woman trespassed from the clinic property. The woman appeared to be living in her vehicle and had been parked in the clinic parking lot for a few days. A deputy spoke with the individual and told her that she needed to move her car or the property owner would have it towed. She said she was getting gas and a new battery and would have it moved shortly. 9:49 a.m. A caller at a Rosedale business reported that three people were bothering their customers. A deputy responded and the trio agreed to leave. 8:35 p.m. A Puget Island resident accidentally called 911.

November 26 – 8:16 a.m. A hunter reported that he had slipped while going after a duck, that his waders were filling up, and that he had dropped his shotgun while trying to swim to shore near the mouth of the Elochoman River. 11:13 a.m. A caller reported that a couple in a beat up car had just pulled into her driveway on Puget Island. 1:26 p.m. The Grays River ambulance aided a Deep River resident who was having trouble breathing. 2:56 p.m. A Deep River resident notified the sheriff’s department that he would be doing some target shooting. 3:07 p.m. An East Sunny Sands resident reported that his neighbor’s dogs were a nuisance. When contacted by a deputy, he said the dogs barked constantly when his neighbor was gone, which was sometimes for hours. The deputy said he would suggest extra patrols in the area. 7:52 p.m. Four callers reported that it sounded like someone was setting off fireworks in the Greenwood Road area. A deputy spoke with the resident who admitted to lighting fireworks. He was given a verbal warning.

November 28 – 10:04 a.m. A Puget Island resident asked for assistance when her cat got stuck in a tree on a neighbor’s property, and the neighbor indicated that he would kill it if it were still there later. The caller said her neighbor would not allow her on his property. A deputy responded and spoke with both parties. The neighbor reiterated his threat and the deputy advised him that if he followed through, the incident would be forwarded to the prosecuting attorney. The deputy contacted the fire department, and a fireman arrived and determined there was nothing that could be done. The cat would come down on its own when it got hungry. 10:06 a.m. The Grays River ambulance aided a Deep River resident who was complaining of abdominal pain. 1:21 p.m. A caller reported an injured deer on the refuge. A message was left at the refuge office. 7:23 p.m. The Grays River ambulance aided a Grays River resident who may have had a stroke. 7:45 p.m. A caller reported that a deer was injured after being struck by a vehicle on SR 4 in the Rosedale area. A deputy responded and euthanized the deer. 9 p.m. A caller reported that a vehicle had driven down a private road on Puget Island and had gotten stuck in the mud in her front yard. 10:17 p.m. A caller reported that a neighbor in Glen Gate had a campfire in his driveway. The caller said the fire was attended, but it was close to vehicles. The Cathlamet Fire Department was notified and a deputy responded. 11:43 p.m. An individual was taken into custody at a Rosedale business.

November 29 – 5:40 a.m. The Cathlamet ambulance aided an Elochoman Valley resident with a possible bladder infection. 6:49 a.m. A Cathlamet resident accidentally called 911. 11:19 a.m. An Elochoman Valley resident reported that cars were blocking her driveway. 5:07 p.m. A caller reported that a controlled burn in the Kents Bridge area seemed to be out of control, stating that the flames appeared to be as high as 75-100 feet. A deputy responded but was unable to locate a fire. The Department of Natural Resources was contacted, as well as the Washington Department of Fish and Wildlife. Someone from the District 4 Fire Department said that there had been slash burns in the area for the past three days.