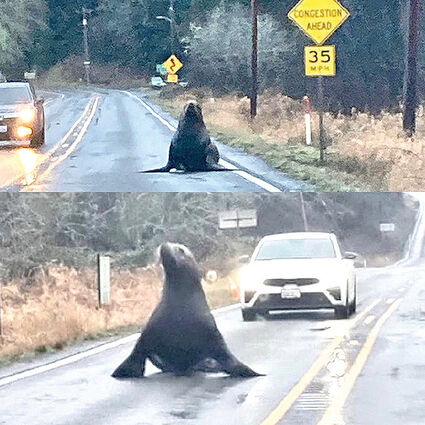 A sea lion cruised down SR 4 last week after having ascended the Grays River and Hull Creek. Wash. State Dept. of Transportation photo.

It was an unlikely sight for motorists on SR 4, when an errant Steller sea lion was seen testing out his land legs Jan. 6 while taking a walk on the highway in the Grays River area.

The sea lion was described as a sub-adult male, likely five or six years old, and probably weighing 800 pounds, according to a report by Columbia River Pinniped Biologist John Edwards of the Washington Department of Fish and Wildlife.

In an earlier report, Captain Dan Chadwick of Region 6 wrote that when the WDFW police responded to the news of the sea lion on SR 4, they found the sea lion in a blackberry bush near a small creek about 100 yards from Grays River.

"The sea lion had moved off the road by the time officers arrived," Chadwick continued. "They attempted to herd it back to the river. The sea lion stopped at the county road 20 yards from the river and would not go any further."

The officers left, hoping the sea lion would find its way to the river by morning.

"Not so lucky," Chadwick wrote.

Instead, the sea lion returned to the same place they first found it: the blackberry bush. The officers continued to monitor the animal, and continued to hope that it might find its way back to the waterway on its own.

If necessary, they planned to live trap the sea lion and return it to the river.

"At the time, waters were near flood stage, which is often the reason for sea lions venturing up side channels and getting lost," Chadwick wrote. "We see smelt runs this time of year in Grays River, which could be a reason the sea lion was in the river."

When the WDFW officers and biologists returned, they found the sea lion sitting in the creek bed just above a culvert leading to the Grays River, and half submerged in the creek flow, according to the report by Edwards.

"After evaluating the situation, we decided on herding the animal back to the river, either downstream through the culvert that emptied directly into the river or an alternate route up over the road to the river, depending on which way the animal started moving first," Edwards wrote. "The primary difficulty came from the terrain-the creek walls were steep and it was choked with blackberries, so we were constrained in where and how closely we could safely approach the animal." 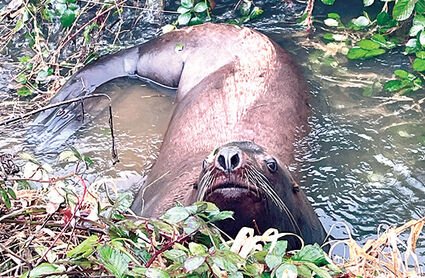 The sea lion was a bit cramped in the Hull Creek channel. Washington Dept. of Fish and Wildlife photo.

They tried prodding the sea lion with bull poles and creating noise, even deploying a seal bomb, a small explosive device, upstream.

They began clearing a path, hacking away at the blackberries with a machete, hoping to approach the sea lion from upstream.

Meanwhile, they tossed crowding boards into the creek. The boards are large flat panels with hand holds generally used to create a temporary wall, thus keeping the user out of harm's way. The group began banging on the crowding boards and generated such a racket that finally, the animal started moving. It needed a little more encouragement, but eventually it headed downstream and back through the culvert to Grays River.

"Not our preferred direction," Edwards wrote, "but we'll take it."