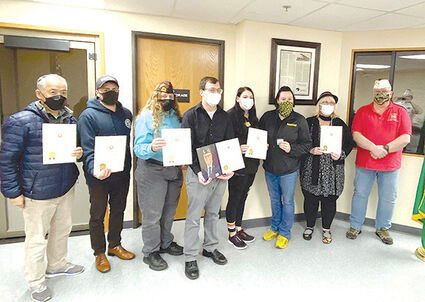 On March 2 at the monthly VFW Wahkiakum Post 5297 meeting, eight local businesses were recognized by the Veterans of Foreign Wars for their support in the Buddy Poppy Program.

VFW State Commander Tracie Williams attended the meeting and presented two certificates of special recognition from VFW National, one to the Cathlamet Market, and the other to Cathlamet Mini Mart.

Commander Williams praised the businesses for their support for Wahkiakum Post 5297 with accomplishing its mission to help veterans and the local community.