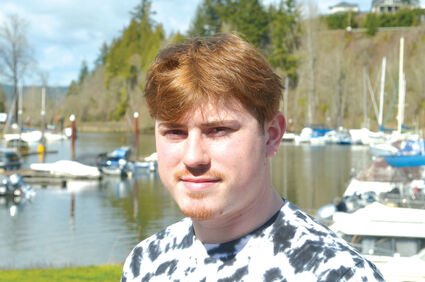 "After school is done, I usually go play sports," Chance said. "There is nothing else I've really done. It's been sports, sports all year around. I've always been competitive. I don't like to lose."

Last year was tough for this athlete, who broke his foot in the second quarter of the second football game, and then broke it again when basketball season rolled around. His favorite sport is baseball, and while he and his foot may have been ready to play, the coronavirus had other ideas.

Chance's family lives in Longview. He has been playing baseball since he was little and spent a lot of time on the diamond with other boys from Cathlamet, so when he transferred to Wahkiakum School District in eighth grade, he not only had teammates, he already had friends.

"That's mostly the reason I moved here," he said.

The friends made the adjustment easy, but he is also happy to say the teachers in Cathlamet are better too.

His favorite classes are environmental sciences and weightlifting, and it just follows that he appreciates those two teachers, Jeff Rooklidge and Marc Niemeyer as well.

During the summer, Chance plays for a Lower Columbia Baseball Club team, and this year he's looking forward to traveling to Denver and Twin Falls, Idaho, to play.

The team is essentially a college scout team. Chance is hoping to play his favorite sport in college and right now is awaiting scholarship offers.

Baseball introduced him to a career goal--chiropractics.

"I had really bad back problems during a Babe Ruth tournament," Chance said. "It took about three appointments with a chiropractor to get my back realigned. It was amazing that they could simply feel and know what was wrong. The better the movement, the better you can play."

He'll never forget his trips to state with the baseball and football teams. Each team's chemistry, no matter the sport or the level, will stay with him as well.

"Everyone was really nice," Chance said.

If he's not participating in a team sport, he might be found at a lake or river, fishing for bass, trout, and more.

"I just cast out a pole and hope I catch something," Chance said. "I used to go with my grandpa. We'd fish for sturgeon, steelhead, and salmon. I started fishing again last year, and I go by myself or with friends."

Chance is the son of Aric and Trisha Cothren.