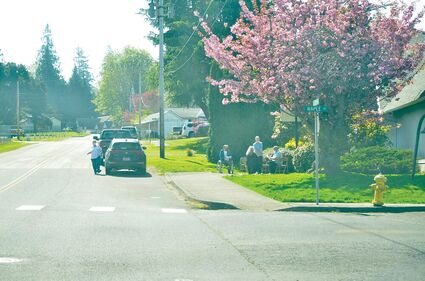 Volunteers and patients gathered Tuesday for a covid-19 vaccination clinic at the Hope Center in Cathlamet.

Wahkiakum County's number of cases inched up by two cases to 108 this week as cases mounted in nearby counties.

In a Monday morning briefing, Chris Bischoff, director of Wahkiakum County Health and Human Services, said one of the new cases was actually a Castle Rock resident, but the state Department of Health is attributing it to Wahkiakum County because of a mistaken address.

"We can't get it corrected," Bischoff said.

Four of the 108 cases are considered potentially active.

Cowlitz County's caseload increased by approximately 100 to 5,300 cases this past week, Pacific County went from 817 to 850. Across the river, Clatsop County has 895 cases and Columbia County 1,500.

Cowlitz County is seeing an uptick in cases, Bischoff said.

New variants of the covid-19 virus are appearing there; although vaccines are effective against them, they are transmitted much easier than the initial strain of the virus and are showing up more often in younger people

"There is a serious amount of covid going on in Cowlitz," Bischoff said.

Overall, Washington state still has a high level of activity, Bischoff said, with the number of new cases around 1,090 per day and hospitalization at 53 per day.

Bischoff said about 35 percent of the county's population has had at least one shot, or between 50-60 percent for people over age 18.

The department held a clinic last Saturday; of the 230 doses available, only 120 were administered. Clinics were also scheduled for Tuesday and Wednesday of this week.

The department has 110 first doses on hand. Bischoff said he won't order any more until it seems likely they would be used. The county will administer second doses in coming weeks.

"We're really running into the vaccine hesitancy issue," he said.

Cowlitz County has held clinics using the Pfizer vaccine, he added; people can register for them through the Safeway pharmacy.

Bischoff feels that with a sufficient level, communities may resume large outdoor gatherings such as Cathlamet's Bald Eagle Days festival.

"We've been talking with the Chamber (event sponsor Wahkiakum Chamber of Commerce--ed.)," he said, "and they have some good ideas.

"We don't know where we'll be then.

"While we closed down events in 2020, I think we should be able to have events like that this year. We'd still recommend wearing masks and staying six feet apart."

The stress of dealing with the effects of covid-19 has taken a toll on people's mental health, Bischoff said, and much more is yet to come as society emerges from the pandemic.

Reports from the past show that in years following the Spanish Flu epidemic in the early 20th century, there was a marked increase in cases of depression.

"We expect to see all of these things as we emerge," he said. "There are signs of stress across the country; some attributed to covid and some to politics."

Last week, federal officials put a hold on use of the one-dose Johnson & Johnson (J&J) vaccine after receiving reports that some people had experienced blood clots after receiving shots.

The move was made as "an abundance of safety," Bischoff said.

Approximately 6.8 million people have received the vaccine; of them, seven people have had the clotting issue. Those people include six women and one man all under age 48.

"Scale is important to remember," Bischoff said. "I expect the hold will be taken off this week; there will just be a warning. There are many medications on the market with similar risk."

The department recently administered about 100 doses of J&J vaccine at a recent clinic in Rosburg. Symptoms of clotting reportedly start to show 2-3 weeks after injection; people experiencing symptoms should contact their health care provider. Symptoms include severe headache, abdominal pain, leg pain or shortness of breath.

Overall, the vaccines are proving to be effective against the varieties of the covid-19 virus.

Of the 77 million doses given in the US, only 74 people have subsequently contracted the illness and died, with death not necessarily attributable to the virus.

"This shows the strength of the vaccines," Bischoff commented.

Bischoff said widespread vaccination of the population is necessary to slow the development and spread of variants.

"The longer people go with no vaccination, the easier it is for the variants to spread," he said. "We're seeing this among kids.

"We just really need folks to get vaccinated."

To register for vaccinations or to volunteer at the clinics, people should call the department at 360-849-4041.